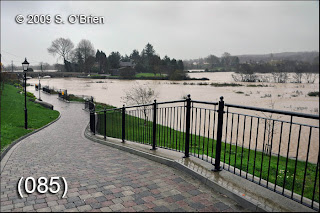 November 19th 2009 brought much flooding to the area following heavy rains, the extent of which can be seen in this image, taken at Portlaw's new riverside amenity area. 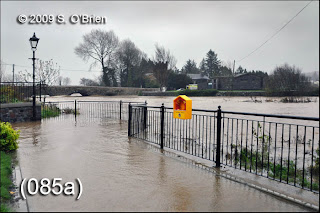 However, the weather was to get much worse, and it can be seen here that Portlaw's bridge, originally built in the late 1700s, was just about able to cope with the tsunami of water sweeping down from the Comeragh mountains, especially from its main tributary - Iske Solas - anglicised from the Gaelic - Uisce Soluis - Water of Light, which rises immediately to the east of Coumshingaun.
The Clódagh river, from the Gaelic - Clóideach - meaning mountain torrent, lives up to it's name at least once every year.
The local fire engine can just about be seen, over the life-buoy,  in front of the former Presbyterian Manse, which the fire brigade was helping to save from the rising water.
Posted by Seán at 12:22 PM