On noticing the gates to Clonagam (aka Clonegam) cemetery open during a recent walk in the area, I decided to investigate what might be going on there, as the both the cemetery and this ancient church (Church of Ireland/Protestant) are closed more-or-less permanently except for as little as one day per year approx.  To my pleasant surprise, members of a monumental sculpturing  firm were sandblasting a headstone there and adding a new inscription. This gentleman, in this hooded outfit with visor, with many cables/tubes leading from him,  looked more like one in a radioactive zone!
I was quite familiar with the headstone in  question, as  it stands out clearly among the many other interesting headstones in the cemetery, which has stones  with interesting inscriptions and iconography going back to the 1700s, many of which I have photographed over a period of time, and will eventually put online.   All the inscriptions on this stone, which date back to the 1800s, are entirely in Irish/Gaelic, and relate to deceased members of the local Coffey  family and predecessors of their’s – the de Paors. The de Paor name has evolved over the centuries from the original Norman – de la Poer (1200s), which eventually has evolved at the present time  to Power, and frequently to Powers in the USA.

Mr Ray O'Keeffe, the now-revealed gentleman without his 'alien-looking' gear!
The O'Keeffe monumental works has been operating in Waterford City for many generations.

Curraghmore farmyard, which I have been photographing unsuccessfully for many years. However this afternoon, May 20th 2011, things just worked because of the light;  the smoke in the background adding to the atmosphere.
All images can be enlarged by  left
-clicking twice on them!
Posted by Seán at 9:02 PM No comments:

Portlaw Pipe Band proudly leads the parade from Parnell Square, Dublin, with the late Billy Corcoran on the extreme left.

The scene at crowded Kildare Street.

Plenty of Portlaw people present, and a flag from CLCG Kilrossanty in the background.

Members of the organising committee who presented many thousands of petition signatures to a security man at the entrance to Government Buildings, as no government minister would accept them on the street!

A well-deserved 'break' at Carlow on the way home!

Assumpta Phelan availed of the 'Pit Stop' too . . .

. . . as did Peggy Brophy, Bridget Kelly and jack Kelly.

Some of the marchers approaching The Square, Dungarvan . . .

where a number of speakers addressed the crowd from a specially erected platform.

Among them was Dick Roche, chairman of the organising committee . . .

Some of the organising committee.

Portlaw supporters were keen to have their banner seen.

The conclusion of the RTE interview.
ADDENDUM 4th September 2011:
The RTE photographer on right, with red cap, is Nelius Dennehy, whom I had the pleasure of meeting again yesterday, Sept. 3rd, on Fiddown Bridge.
I also met him on a trip to Moneygall (see my pictures on Flicker).
To see those images, click on:
http://www.flickr.com/photos/mazurka666/5759978262/in/photostream
which show the first in a series of twenty-four.
Posted by Seán at 6:56 PM

New signs re opening hours and charges have now been erected at the main entrance to Curraghmore House and Estate, which is a very short distance from the roundabout in Portlaw town.
If planning to visit the place, take note of the open days and opening hours. 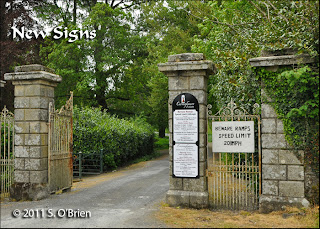 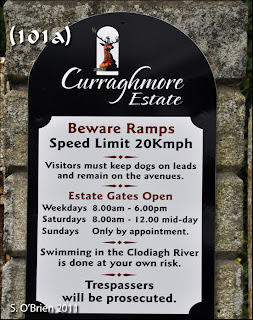 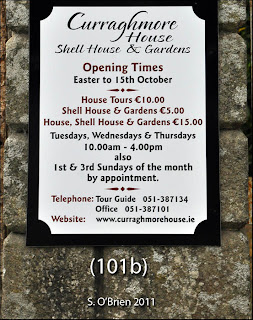 Note the website address for the house, where you can read about the history of the place in advance:
www.curraghmorehouse.ie
Posted by Seán at 12:34 PM No comments: