Greetings from Portlaw, County Waterford,
to you out there in Egypt,
viewing pages from our Blog
just now!
Posted by Seán at 10:33 AM No comments: 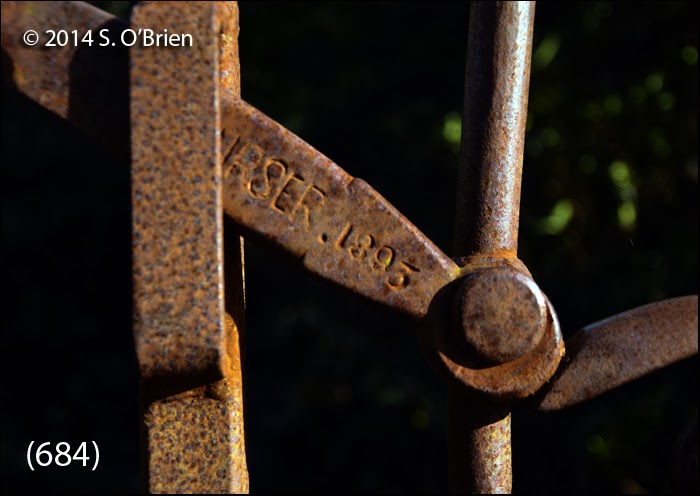 This interesting manufacturer's mark on an estate gate-latch caught my eye a number of times,
but only yesterday did I see it lit by the pleasant sunshine which we had most of the day!
I have endeavoured, but failed, to find any info on the manufacturer. whose name was PURSER,
In the past I have traced the manufacturer of gates from the 1800s at the site of
a former GOING house at Ballyphilip, South Tipperary.
The name there was PROCTOR, who worked from Clonmel!
The name GIBBS, from Ballypatrick, can be found on
many gates, cemetery grave-markers and railings in the Clonmel area.
..................................

Well, I got more than I bargained for as there were PURSERs galore in Portlaw in the 1901 census,   taken on March 31st of that year, which is there for all to check out on the Internet:

The Household Return Form for Curraghmore was filled out by the Marquis himself, Henry Delapoer (sic) Beresford, then aged 25 years, in beautiful handwriting, and signed by the enumerator, James Slattery - Constable, in an equally fine hand.

Out of a total of a total of 33 occupants, shown as living in house No. 1, obviously Curraghmore House itself, were five members of the Beresford family, plus 28 servants, and among them was HANNAH PURSER, then aged 25 years, a housemaid and domestic servant. Hannah’s birthplace was given as County Carlow, marital status – single, and she was shown as a member of the Church of Ireland.

All other PURSERS mentioned hereunder were shown as members of the Church of Ireland.

A grand total of eleven PURSERS at Curraghmore estate, and three of them blacksmiths!

An examination of the 1911 census, showed considerable changes after a lapse of just ten years, as follows:

House No. 10 in Coolroe townland, showed as follows:

RICHARD PURSER, aged 41, (married), head of family, estate blacksmith; SUSANNAH MARY, aged 63 years, mother (widow), and Susanna Mary, aged 13.
……………………………………………………………………………………………….
After all this, I thought it better to also look up the surname in County Carlow via Google, and came up with the name NATHANIEL PURSER, blacksmith, from Staplestown. Despite much searching, I failed to find it a second time in order to get further information. This is surely a definite link with all those Portlaw PURSERs.  It’s quite possible that this Co. Carlow NATHANIEL, was the man of the same name who lived in house No. 16 at Curraghmore in 1901!  If so, he forged the gate in question in 1893 at the age of 23, when head blacksmith in Curraghmore, but I'm surprised that, being a servant, he was allowed to put his brand on the gate!

By sheer coincidence, I had photographed the picturesque Church of Ireland building at Staplestown in 2012 on my way to county Wicklow. Maybe I should go back and have a look at headstones there next time I’m in the area. 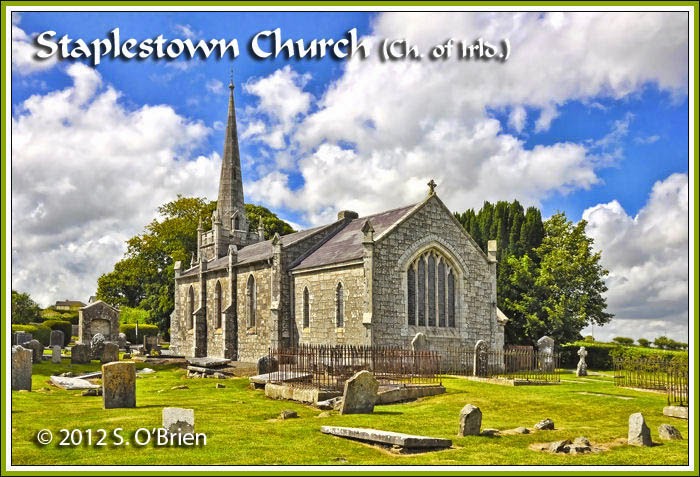 I’ll leave further searching over to YOU!!! 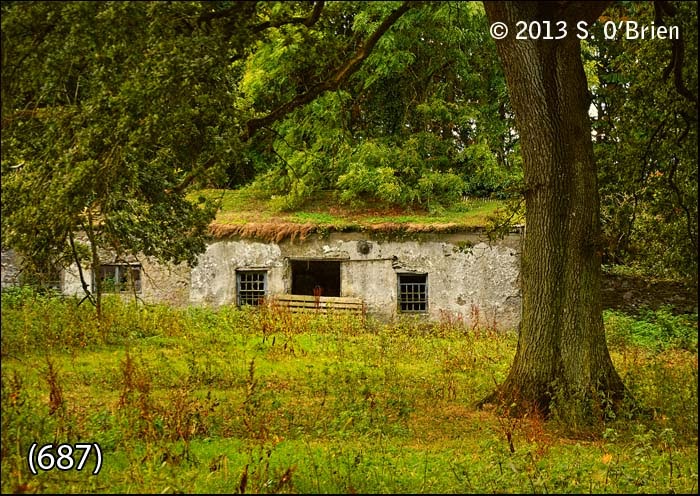 PROBLEMS WITH PREVIOUS PAGE, WHICH I AM UNABLE TO CORRECT AND COMPLETE JUST NOW!

I have since managed to correct the situation
simply by changing my browser back to
Mozilla Firefox!
Posted by Seán at 5:06 PM No comments:

A BEACON TO LIGHT UP THE FUTURE??? 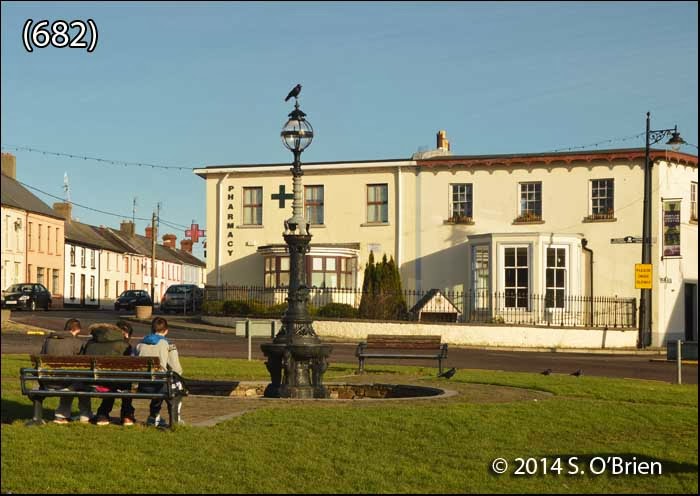 A new light for the top of the Caldbeck Fountain in Malcomson Square, after a very long wait!
This was noticed only yesterday, but I understand the new replacement was installed before Christmas.
In the background can be seen O'Neill's Pharmacy and the Heritage Centre. The replacement matches exactly that photographed by the Poole Photographic Studio very many years ago, which was fuelled by gas. The new source of power will be electricity.
The birds are obviously quite pleased with this new vantage point!