With Egypt in the news around the clock on worldwide TV stations at the present time, did you know that there is a Portlaw connection with that country?
The answer can be found on a memorial plaque at Clonagam Church, Portlaw. 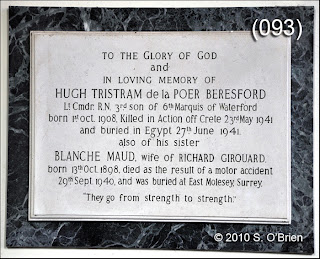 Lieutenant-Commander, Lord Hugh Tristram de la Poer Beresford,  born in 1908, was son of the Sixth Marquess of Waterford, Henry de la Poer Beresford and Lady Beatrix Frances Petty-Fitzmaurice.
He had enlisted in the Royal Navy and rose to the rank of Lieutenant-Commander.
During Wordl War II, whilst serving aboard the H.M.S. Kelly, he was killed in action off the island of Crete. He was buried in Alamein War Cemetery, Egypt, on 27th June 1941.
﻿
Posted by Seán at 2:26 PM