The village of EMO, in County Laois ( from the Irish IOMA, which I can't find a translation for), is situated a few miles N.E. of Portlaoise, on the road to Portarlington.

The village grew up around the estate called EMO COURT, founded in the late 1700s by the then Earl of Portarlington.  The estate in those days consisted of thousands of acres of land. The 3rd Earl, Henry Dawson-Damer, donated the site for the village's Gothic R.C. church, Saint Paul's, completed in 1870 approx. 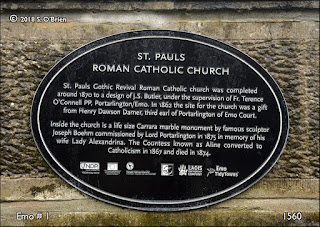 We noticed the above plaque on an entrance gate pillar while driving by one day at Easter last. 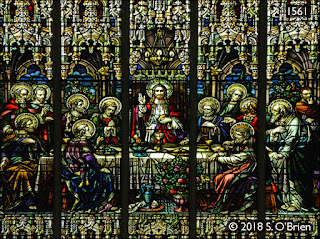 The church's fine interior includes some beautiful stained glass windows, especially that over the altar, depicting the Last Supper, also one depicting Mary Magdalene washing the feet of Jesus 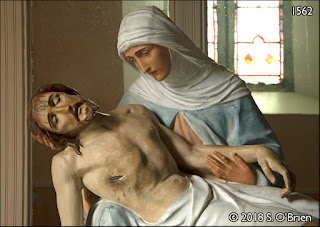 In addition, there's this fine 'Pieta' on left inside the main door. 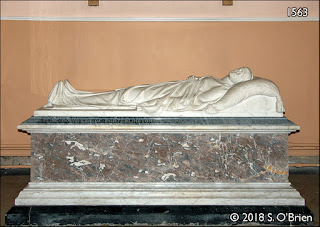 Main attraction, however, must surely be a life-size Carrara marble monument by the famous sculptor, Joseph Boehm, which was commissioned by Lord Portarlington in 1875 in memory of his wife, Lady Alexandrina, better known as Aline. 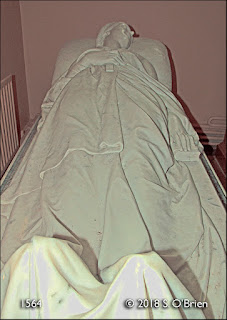 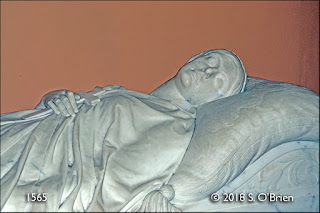 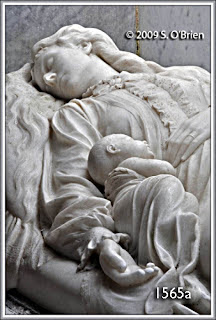 Lady Florence died in childbirth.
Both herself and her infant child are buried outside the front door of
Clonagam Church (Church of Ireland/Eaglais na hÉireann), Portlaw,
County Waterford.
Further pictures of the memorial can be seen on this blog
by clicking on the Clonagam Church entry
under 'Popular Posts' on the site's home-page.

N.B.  Clonagam Church and cemetery are seldom open nowadays;
maybe only one day a year! 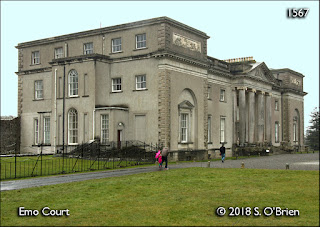 The present house, known as Emo Court, situated near the village of EMO in County Laois, was only under construction in 1798, when its owner, John Dawson, the 1st Earl of Portlarlington died. After the Phoenix Park, the enclosed estate was then the second largest in the country.
He employed the architect, James Gandon*, to draw up plans for his new house in 1790, and therein lies the second Portlaw connection.
Construction continued under the 2nd Earl, also John Dawson, but he passed away in 1845, leaving the building still unfinished. He had employed a new architect to continue with the work, changing much of what Gandon had planned.   The 3rd Earl, Henry John Reuben Dawson-Damer (1822-1889), more-or-less brought the house up to its present status.
Like many of his Anglo-Irish contemporaries, who during World War II, The War of Independence and the Civil War, left the country, Henry left the estate, then covering an area of twenty square miles, and sold it to the Irish Land Commission in 1920. Much of the land is believed to have then been distributed among local farmers, but the house remained idle for the next ten years until it was purchased, along with 250 acres, by the Jesuits, who turned it into a Novitiate.


Among those novitiates was Fr. Francis Browne, the distinguished Irish photographer, who travelled the country, as a missionary, for many years, and created one of the finest collections of images depicting the Irish people and places during the period 1930 to 1957. His pictures relating to the Titanic are his most famous. 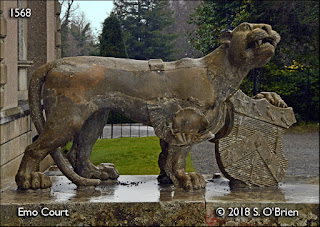 Emo Court now houses a fine display of his work to which admission is free. To view the remainder of the house, there is a reasonable charge, with a reduction for seniors (which many places of interest do not have!), also students, children and families. Entrance to the magnificent park, with its many fine trees, is also free, and includes a car-park, picnic tables and toilet facilities, also a tea and lunch room.   Check out www.heritageireland.ie for further info. For Sat Nav owners, the postal code is:  R32 C44V.

Further text to follow!
Posted by Seán at 2:08 PM No comments: 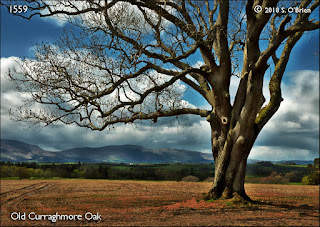 Looking towards the Comeraghs, with the highest point, Knockanaffrin, left of centre, and 'The Gap' nearer to left.
Posted by Seán at 2:48 AM No comments: