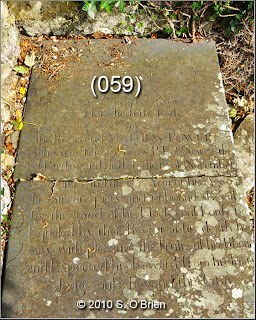 The present Roman Catholic Parish of Ballyduff & Portlaw once consisted of four ancient parishes – Kilmeaden, Newcastle, Guilcagh and Clonagam (sometimes Clonegam, in case you are searching through old records).
The now-ruined Newcastle church  can be found by turning left at the roadside pub (formerly Haughtons’), in the townland of Ross,  as one travels from  Kilmeaden towards  Carrolls’ Cross,  continuing until one reaches a junction to the left, where the entrance to the site will be quite obvious. It is set well back from the road.  This ancient cemetery is very well looked after and has a number of interesting headstones.
Here also you can find a table tomb or altar tomb (photo above) with the following inscription:
Here lieth the Body
of
the Reverend MATTHEW POWER
who was for 29 Years P.P. of  Newcastle
& Portlaw and died on the 17th of November
1813 in the xxxx (illegible) Year of his Age.
his Sincere piety and unbounded Zeal
for the good of his Flock could only be
Equaled by their Regret at his death he
Saw with pleasure the Fruits of his labour
and Expected his Reward from his Just
Judge only beyond the Grave.
N.B. The ampersand (usually ‘&’ nowadays – for the Latin ‘et’ or ‘and’), between the words ‘Newcastle’ and ‘Portlaw’, is one I hadn’t seen up to then. It may well have been used by that particular monumental sculptor only.
The spelling, capitalization of letters, punctuation and the layout of the lines above is as on the stone.
The iconography on the upper portion of the stone includes ‘IHS’ (Several theories about this anagram, but believed to be the Latin for – Iesus Hominum Salvator – Jesus, Saviour of Man. Some think it represents the first three letters of ‘Jesus’ in Greek! Also  included – ‘Gloria in Excelsis Deo’,  a ciborium and two candles in holders. 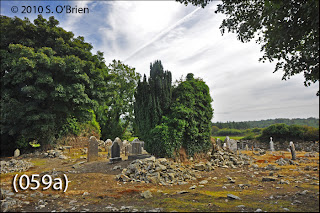