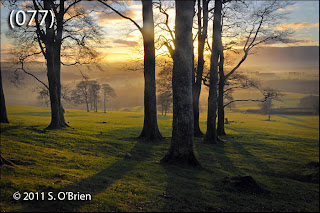 When a section of the Curraghmore boundary wall on the hill down to Clonagam church collapsed very recently, it opened a completely new view of part of the estate - which I understand is the largest in Ireland.
This afternoon (Jan. 19th 2011),  I made use of the gap, and succeeded in getting a few nice new images as the sun was about to go down over Croughán and the Comeragh mountains. 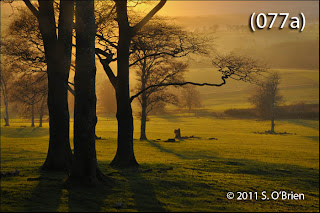 There were pictures to be had all around in a semi-circle! 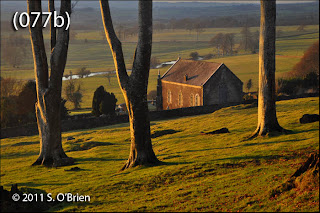 Clonagam Church, which was on my right, was beginning to look better as the colours warmed up.
The water in the middle distance is called 'The Shepherds' Pond'.
The name of this townland*, Clonagam, is from the Gaelic - 'Cluain na gCam' - meaning the Meadow of the Bends, or Windings, as in a meandering stream, river or path through the countryside.  It may well refer to that pond+stream or the nearby Clódagh river.  Placenames or Townland names beginning with the word 'Cloon'  or 'Clon' - meaning 'Meadow' - are quite common and can be found nationwide.
* Ireland is divided into over 64,000 townlands approx., almost entirely bearing Gaelic names from aeons past.  On the series of Discovery Maps, the townland names are to be seen, but the boundaries themselves, which are usually roads, streams or hilltops, are not marked.  To find the exact boundaries, one must consult Ordnance Survey Maps, which are usually available to examine in the numerous libraries throughout the country. 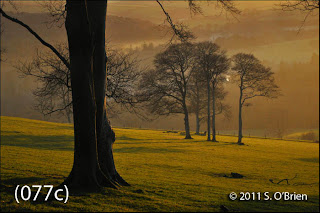 Finally, I settled on the above image as being the best of the afternoon, but there were quite a few more, as these magnificent  beech trees, and the remains of many fallen ones,  were all over the place.
Here the rising fog in the Clódagh valley is quite obvious and a tiny bit of Curraghmore lake is visible through the trees.
Note that in the last three pictures I left out the sky. Skies can frequently be a problem, if they are just grey, insipid,  too bright, etc.
Posted by Seán at 8:54 PM