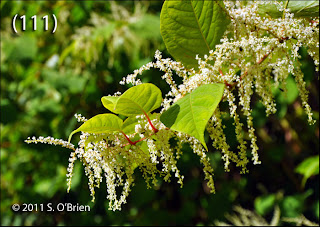 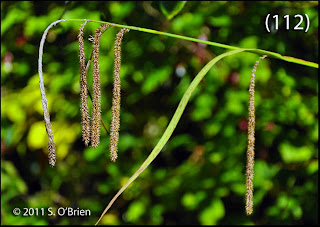 The above plant, or ornamental grass, is called Pendulous Sedge (Carex pendula), and one which I only noticed about two years ago apast the Polo field, where there was a single plant. Since then I have seen others along the roadside stretching from Curraghmore main entrance to the Carrick Gate.  These plants are in seed just now (end of August), and even though they might look nice in your garden, it may be inadvisable to collect the seed to grow at home, as this too may be of the invasive kind. I assume this plant strayed from Curraghmore estate garden/s over the years.

I first noticed the above flower, Agrimony, on the roadside apast Tower Hill cottages, in 2005 approx., when there seemed to be just one plant present. The number of plants in that area has increased considerably since. Isolated, like it is here, and with an out-of-focus background, it is again most attractive.
The plant is reputed to have NUMEROUS beneficial medicinal properties, including sleep-inducing, but I will leave it up to GOOGLE to supply you with all that information. 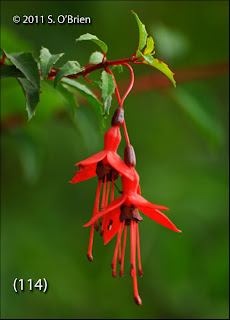 There appears to be just two Fuchsia bushes on the road to Clonagam, one beside the Mont Bretia - mentioned below, and the second as part of a hedge at the old estate cottage beside Clonagam Church.
There is also a very pale pink, and rather insipid variety on the other side of the cottage entrance. 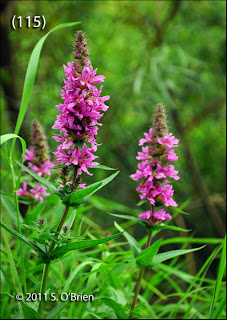 PURPLE LOOSESTRIFE:  Botanical name – Lythrum salicaria L.   I noticed this attractive flower  on the roadside near Carney’s Bridge, while photographing the recently-arrived Heritage Boats.   Then I realised there were many more inside the fence. These grow in marshy places, reed swamps, and beside rivers and canals. This plant is a native perennial, and the flowers appear to be at their best just now (first week in September). 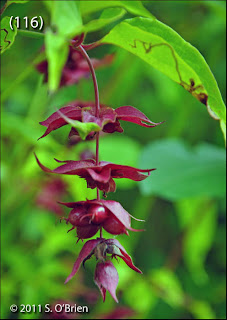 If you know the botanical or popular name for the above plant, I would appreciate hearing fom you! This specimen was photographed at the edge of Tower Hill forest, but I've seen it in some gardens and growing on top of a wall! 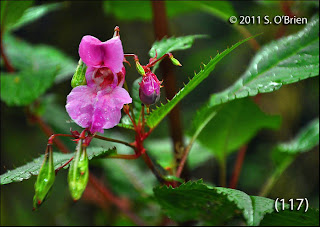 This attractive flower was photographed near the old lime kilns by the Clódagh river, where it was found in abundance.
Botanical name - Impatiens glandulifera - it has numerous popular names including: Policeman's Helmet, Kiss-me-on-the-Mountain, Indian or Himalayan Balsam, Poor Ma'ns Orchid, Touch-Me-Not, etc., and was introduced from India to various parts of the world in the early 1800s. It flowers from June to October and reaches a height of 3 to 6 feet.  It is classed as invasive in some places, and grows usually by river banks and damp places.
Among other uses, a homeopathic remedy for irritability has been extracted from the plant in edible oil form, and is available from some health food shops!

WILD MINT :  Botanical name – Mentha arvensis.   This again is a native perennial, found in waste areas and damp roadsides usually. Has a very strong smell, just like the well-known garden herb. It has been found in Egyptian tombs dating back to 1,000 B.C. The plant is considered to be invasive.
I photographed this specimen by the roadside where there’s a  weir on a small stream  before you come to the last house on the road from Clonagam church to the Carrick-Kilmacthomas road. However, an hour later I discovered a large concentration of them in and beside the sluggish stream adjacent to Coes’ Lodge in Curragmore estate, where I had been walking.   This stream is the outlet from the Shepherds’ Pond. Obviously these flowers are at their best just now (first week in September).

This colourful flower, with the popular name Montbretia (botanical name - Crocosmia),  is quite common in the Irish countryside, and it is plentiful on the roadside from Curraghmore main gate to Clonagam church. A member of the Iris family, it is a native of South Africa. There is also a garden hybrid with much longer leaves and larger, more-vivid  flowers. The variety - Lucifer - has become a common sight in Irish gardens in recent years.
This photo was taken on the right-hand side apast the top-most house as one travels uphill to Clonagam church, where there is a very large concentration of it.  I suspect it may have come from the derelict residence directly across the road, which also has a fine Buddleia bush by the old rusty gate. I believe a family named Piquet lived there. If so, there is obviously a connection with this family and Piquets Cross about two miles away.

With signs of Autumn slowly appearing, this Fern in the Ballycahane area had already changed colour and was an attractive sight amidst all the green.
Some text to follow.
Posted by Seán at 8:24 PM No comments: 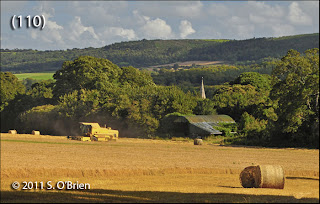 Saving the harvest at Coolroe, Portlaw, two days ago.  The spire in the picture is that of Holy Trinity Church.
The picture is being used today, Friday 26th August,  by TV3 in it's weather forecast (Martin King). 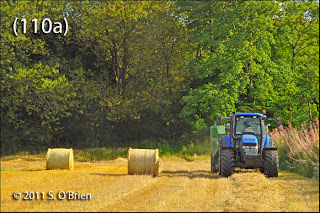 Here, simultaneously, a tractor was travelling aound the cornfield, baling the straw left by the combine harvester.
Posted by Seán at 5:38 PM No comments: 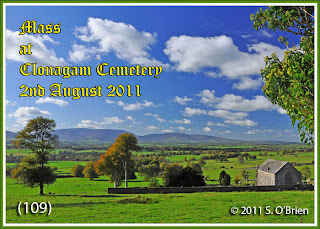 Mass was celebrated in the cemetery attached to Clonagam church (Church of Ireland) on August 2nd this year, 2011, possibly the first since the infamous Penal Laws were introduced in Ireland in 1695. These anti-Catholic and anti-Dissenter laws lasted until Catholic Emancipation in 1829 (somewhat earlier for Dissenters).
Over the years, both Catholic and Church of Ireland burials have taken place in this interesting hillside cemetery with it's spectacular view over Curraghmore estate towards the Comeragh mountains. There are very many table tombs where members of the Beresford family, Curraghmore, have been interred, also headstones commemorating people connected with Portlaw's thriving cotton industry in the 1800s.
Of particular interest are Catholic headstones with iconography depicting Angels and the Passion of Christ from the 1700s and 1800s.
The event was a truly ecumenical occasion with people from both sides of the religious divide playing an active part. Congratulations to the Carrick-on-Suir lady who initially had the idea and suggested it to local Church of Ireland rector, Canon George Cliffe, of the Fiddown Union. Canon Cliffe then contacted local Catholic curate, Fr. Ned Hassett, who took it from there, with the assistance of various people. 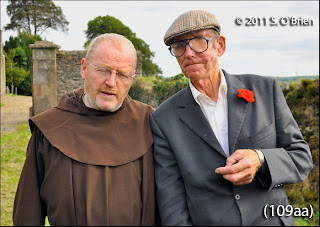 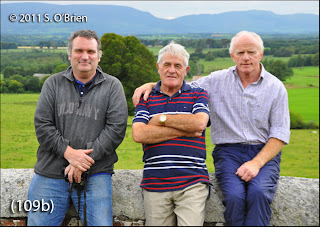 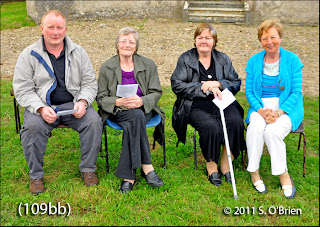 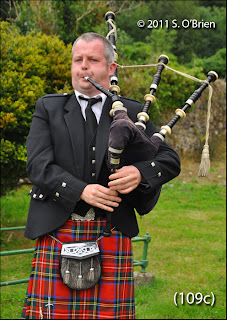 Local Piper,  Paul Power, who played quite a few approporiate pieces of music. 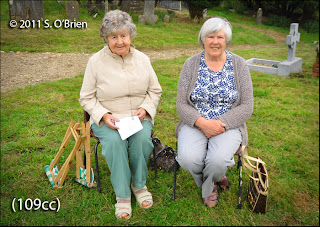 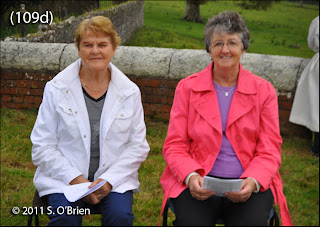 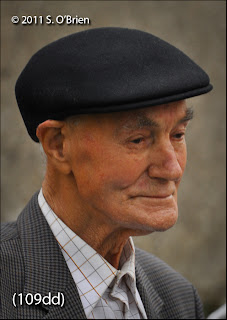 . . . as was nonagenarian, Maurice Nugent, who never mises a function! 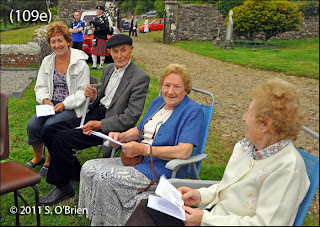 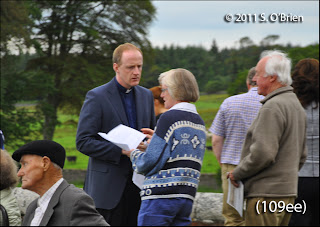 The readings being discussed.

Some people used the S.E. surrounding wall for seating.

Three of those who did not have a seat, and just stood for the duration of the ceremony.

. . . while Rev. Canon Cliffe spoke about what led up to the evenings event.

Lord and Lady Waterford, plus Ann Walsh were some of the lucky few who managed to secure a seat.

A reading by Lord Waterford.

The evening was now darkening somewhat, but it still remained reasonably warm.

A reading by Rev. Jenny Crowley.

A reading by Mr. xxxx Coffey, son of the late Brendan Coffey (see image/post No. 104c.)

A reading by Ger Crotty.

There was plenty to talk about when all was over, and here Canon Cliffe tells one of his famous jokes to Angela Lyons and Maura Power.

Some people visited family graves or simply examined the many old headstones, including Canon Cliffe and xxxx xxxx (?)

Michael Walsh beside one of the fine Beresford memorials at front of church.

A final word from Fr. Ned.