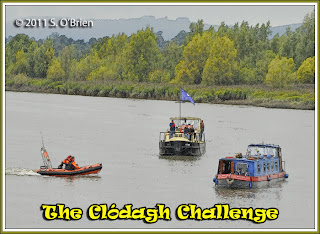 History was made during the weekend (3rd and 4th September 2011) on the river Clódagh, when four barges from the Heritage Boats Association sailed up the river to within a few hundred metres of Portlaw Bridge, reaching  the  Clódagh and Cotton-Mill canal junction. They were believed to be the first  such barges to make the journey since sand-barges came up-river in 1934/1935 with building supplies for Portlaw’s new  Tannery.  They had spent the previous week moored  at Piltown on the Pill river, as part of a Heritage Week programme.  As with Portlaw, these were the first of their kind  up the Pill in a whole generation.  These water-craft are normally based at different locations along the Shannon river, and came to the Suir/Pill/Clódagh area via the canal system which traverses the midlands, and then down the river Barrow to the confluence of the Suir, Nore an Barrow  near Cheekpoint, then up-river to Carrick-on-Suir and the  two other locations already mentioned. 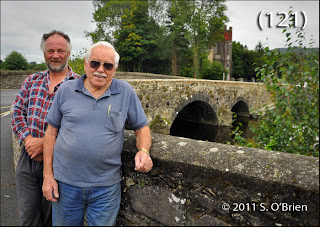 Robert Keane and John Kiely at  Portlaw Bridge, awaiting news of the whereabouts of the boats in queston.    Robert descended from the Faulkner family, renowned stone-masons  from N.I. ,who were invited to Portlaw in 1850 by the then Marquis of Waterford  to build the boundary wall around Curraghmore estate.  This wall is approx. 13 miles long!  Later the family moved to Carrick-on-Suir where their name was synonomous  with stone-building.  Robert now lives in Australia, where he emigrated to 30 years ago, and still carries on the family trade of building. 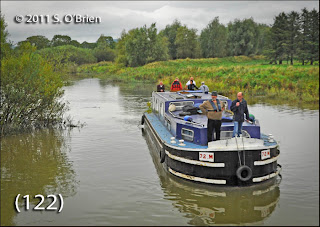 The first barge, of the four, sailing up the Clódagh from the Suir, the first such vessel to do so in more than a generation. History in the making!
Well done to all concerned! 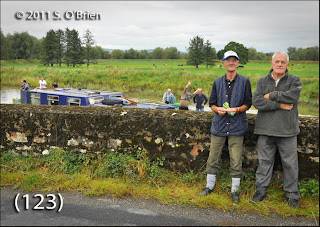 There was a lengthy delay here at Carneys' bridge as the tide was too high for them to pass underneath!  Johnny Crotty and Jodie Keane were, like myself, travelling from bridge to bridge to find the whereabouts of the boats.  Many Piltown people travelled here also for the view. 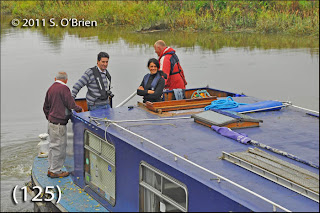 Some Piltown people travelled on this first boat up the Clódagh.

Sometime later in the afternoon, when the tide had dropped sufficiently,  this first barge succeeded in sailing under Carneys' bridge and managed to reach Coolfin, by which time the tide had dramatically lowered.  Notice the shallowness of the water in this picture.
Among the very first arrivals were L. to R. - Susan Daniels and Frances (aka Frankie) Finnegan of Piltown who had been following the boats' movements from their departure time in Piltown. It was a pleasant surprise meeting Frances here, whose lecture on Irish Work-Houses I had attended in Waterford city many years ago.  Dr. Finnegan recently retired from Waterford Institute of Technology, where she was a lecturer in Social History, and spends much of her time in Venice.  She is the author of a number of very interesting and popular books. Read all about them on her website:
www.congravepress.com 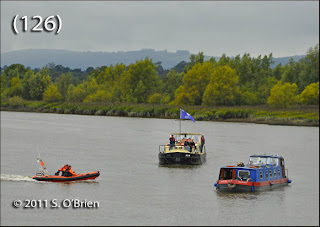 Two of the final three boats, accompanied by the Carrick River Rescue craft, heading down towards Fiddown bridge.  This final three had been delayed for a considerable time on the river Pill because of the height of the tide at Tybroughney railway bridge.

The first of the three boats, having passed under Fiddown bridge on the river Suir, heading downriver towards the passage up the Clódagh.  Informed by mobile phone that the tide was too high (maybe this should read - 'too low') at Carneys' bridge, they headed for Polerone pier on the County Kilkenny side of the Suir to await developments.  I headed to Polerone later in the day, but not a sign of a boat there; they had headed off once more for the Clódagh to await a suitable tide! The scene at Polerone, with the sun getting lower in the sky,  looked great, however.

Robert Keane, seen in the first image in the series,  at Carneys' bridge with his sister, Nellie O'Brien of Tybroughney, on Saturday evening, awaiting the last boats boats, which did not arrive until quite late.

On the following morning, Sunday, this gentleman, one of Portlaw's newest residents, was one of the first on the scene to see the boats, the balance of which has come up at an opportune moment late Saturday evening, when the tide was low enough to pass under Carneys' Bridge but high enough to sail on.  They needed a minimum of three feet.

The Aqualegia turns at the confluence of the Clódagh river and the Cotton-Mill canal. This was the furthest point the barges could travel due to over-hanging trees, etc.

Modern Guinness barrels on those ancient Guinness barges!!!
More than likely they were used for water storage.

Gerry here looked as if he could do with some help . . .

. . . and then along came John and Paul Duggan from across the road!

Who said that 'messing about in boats' was fun?

Hardly an inch to spare!

Getting a little crowded!

The Barges in question were moored at the edge of the field in Coolfin where these lime kilns are situated. I was informed that the lime produced here was for use, as a fertiliser, on Curraghmore estate.
As there appears to be no limestone in this locality, I presume the stone was brought by barge in days gone by from some pier on the Kilkenny side of the river Suir. This was the case, I've heard, at Mount Congreve lime-kilns some miles downriver by the Suir.
-   oooOooo  -
You can read all about the
HERITAGE BOAT ASSOCIATION
at
www.heritageboatassociation.ie
Posted by Seán at 8:18 PM No comments: