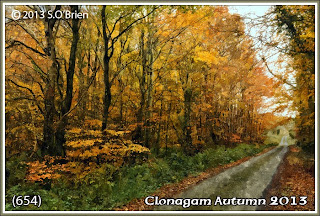 Autumn colours have been with us for some weeks, but are quickly disappearing,
and snow is expected in a few days.
The Clonagam road has been most impressive in many places, as can be seen above,
with it's Beech trees, Spanish Chestnut Trees, and that most invasive Japanese Knotweed! 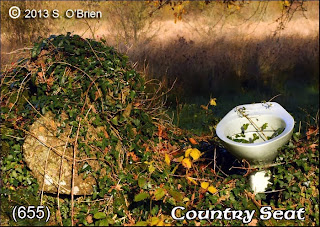 You're likely to see ANYTHING dumped on the roadside and over fences in the Portlaw area
in recent years. 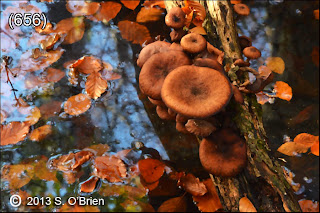 Fungi on a woodland pond, Curraghmore. 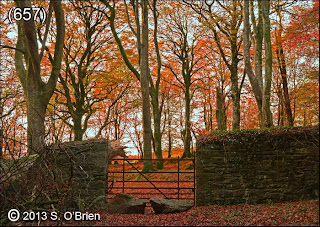 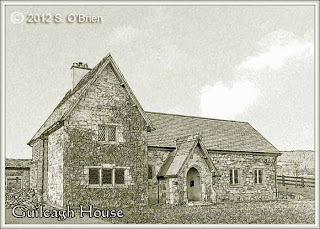 This beautiful building, a few miles south of Portlaw, built in the 1800s
as the rectory for Guilcagh church, was later used as a school for some time.
The house has been modernised in recent years to the highest standards
and is once more a dwelling house.
Posted by Seán at 11:13 AM 2 comments:

THE GHOSTS OF CLONAGAM

One winter’s night long, long ago in our little cottage, Mick Brett, our neighbor and shepherd on the Curraghmore estate, told the following story, as we sat around the kitchen fire. The room was almost dark, as the one lamp flickered, casting shadows all over the floor.
I was no more than five years of age, but I remembered every word he told us, as he drank his mug of tea. 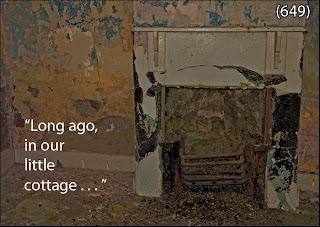 (the actual fireplace at Farm Lodge, where the story was told – photographed in Oct. 2013). 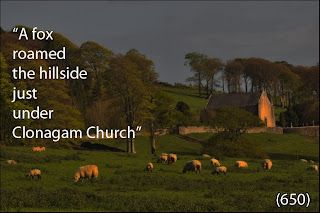 He began . . . “Last summer, late one evening, I was guarding a flock of sheep with their young lambs. A fox roamed the hillside just under Clonagam church. He lurked in the darkness, hoping to pounce on a solitary lamb, separated from the flock. In a flash he would pounce and drag his prey, hanging down between his legs, heading towards ‘Mother Brown**’, where he and his cubs would enjoy a late supper.  The night was calm and quiet; even the crows were silent”.
All of a sudden, Mick heard a shuffling noise coming down from the direction of the Tower Hill cottages, where lived Bill Rowe – a herdsman, also Jimmy Keyes– a shepherd. 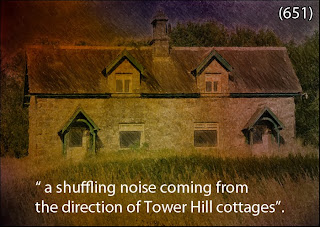 He looked up the road and saw lights flickering. The noise grew louder. A ghostly fear came over Mick, and the hair stood on his neck. His hands, that held the shepherd’s crook, grew sweaty. He held his breath and lay quietly behind the wall. The footfalls grew louder.
A large crowd arrived, carrying candles, with grease dripping on their hands, as they clutched their Rosary beads and mumbled prayers. A man at the rear of the group carried a white coffin lovingly in his arms. Sniffles were heard from the ladies. They all passed by where Mick lay, and entered the graveyard. Shovels were heard breaking the stony earth. The funeral was soon over and Mick made his way down the hillside to his home in the farmyard.
I never heard who was in that coffin more than sixty years ago. It may have been a still-born baby. The Catholic Church in those days did not agree with non-baptised infants being buried in consecrated graves. Hence the burial took place took place in secret, at night, in a Protestant graveyard*, where, in fact, both Catholics and members of the Church of Ireland lie buried side by side .
Many ghost stories have been told in Curraghmore . This story had a surprise ending . . . the ghosts of Clonagam disappeared into the night!
I made my way down to my bedroom . I tossed and turned into the night. Finally, as I drifted off to sleep, I was still counting sheep.


The sites where non-baptised children were interred were called ‘CILLÍNs’, and there were hundreds, if not thousands of them, throughout the Irish countryside.  Traditionally dead babies were buried between dusk and daybreak. The church showed lack of compassion dating back to St. Augustine, who stated that although infants committed no personal sin, still they had the guilt of Original Sin, barring them from Heaven and sending their souls to Limbo. Luckily the church recanted its views on Limbo and Churching for mothers, and presents God as a loving father.
**Footnote 2:
Our ‘Mother Brown’ is a figure of mystery. Did she arrive from a volcanic eruption, and was she placed strategically on the hillside by some workers on the estate generations ago?  She must have magnificent memories from the past. She watched the coach leave for the coast. This coach was drawn by four horses. The driver was dressed in livery and the footman was at the rear.
My old grandmother,  born just after the Great Famine, was told the day of the Headless Coach was coming.  Henry Ford invented the car and Curraghmore was soon mobile.  Local people were frightened and jumped into the ditch when they heard the noisy contraption arriving. 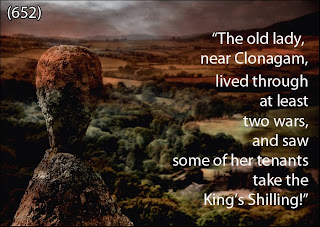 Old ‘Mother Brown’ saw many festivities, including Christmas parties for the people who lived on the estate ,and scores of children from Portlaw. She heard the farmyard bell toll at 8.00 am, 1.00 pm and 6.00 pm. Each August she heard  melodious sounds coming from the courtyard where Mick Delahunty and his orchestra from Clonmel  serenaded hundreds of people from surrounding areas who cycled in the dark from Carrick-on-Suir, Rathgormack and Clonea to dance the night away. On balmy nights their wonderful sound filled the air all over the estate and reached the ears of ‘Mother Brown’.
The old lady,near Clonagam, lived through at least two wars, and  saw some of her tenants take the King’s Shilling, like my grandfather – Jack – who was wounded early in World War I, and given up for dead. The  then Marchioness of Waterford found him in a military hospital in France. Jack still carried in his back shrapnel from the day, until he died.
Alas, ‘Mother Brown’ saw the might of the aristocracy disintegrate before her eyes. In the ‘good old days’, Fred Astaire, Jack Lord and too many Lords and Ladies to recall, DINED AT Curraghmore. It was the original ‘Downton Abbey’, on the outskirts of Portlaw.
A story is told about an attack on the ‘Big House’ during the Civil War. The night was dark and cloudy as the nervous attackers approached the courtyard. All of a sudden, there was a flash of lightning, which lit up the Cross of Lorraine between the antlers of the deer over the main door.  When the raiders saw the sparks on the Cross, they thought it was a sign from Heaven, and disappeared hurriedly into the night. I’m sure ‘Mother Brown’ had a bird’s eye view of this abortive raid, a story which has been handed down by people who lived in the courtyard.
‘Mother Brown’ has seen it all from her perch at Clonagam. If those lips could only speak?
-  Jack Kelly, Nov. 7th, 2013.
.................................................................. 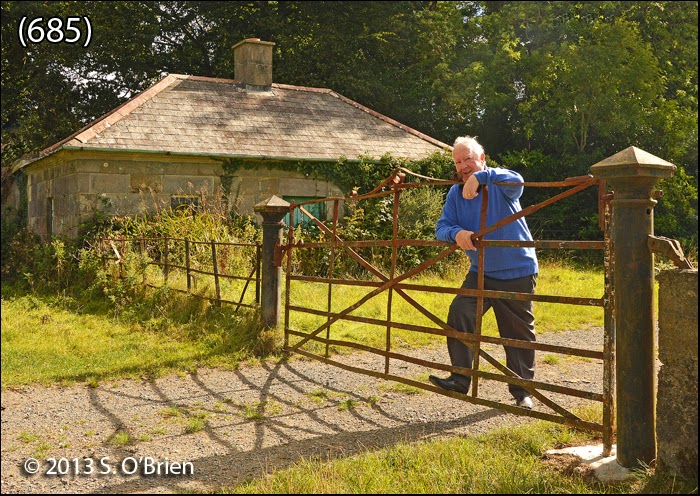 The author, Jack Kelly, at his one-time home,  Farm Lodge,
with the gate which his ancestors controlled for many years. 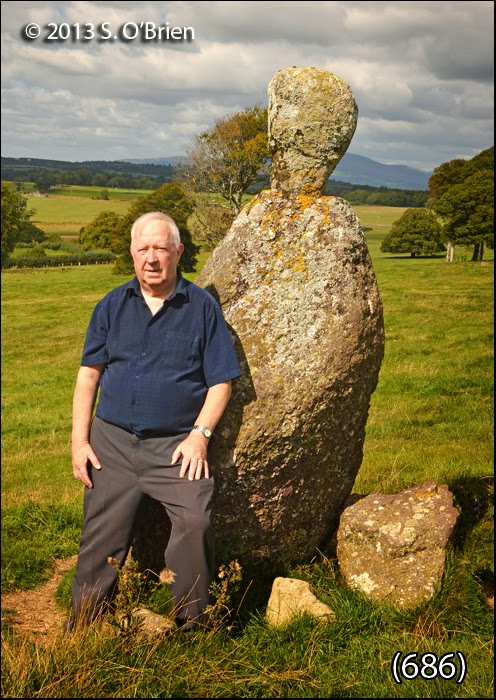 -   oooOooo   -
Most images on this site will, with a single left-click, show up in a larger size on a black background!
Posted by Seán at 8:49 AM 2 comments: