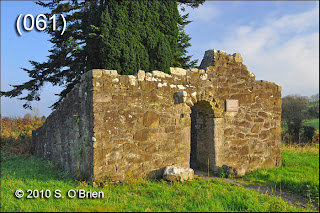 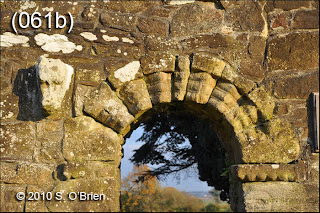 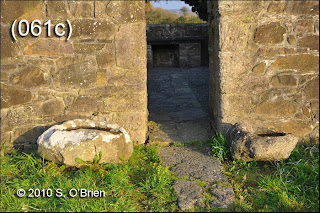 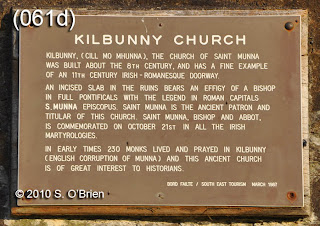 1987 South East Tourism notice.
The reference to the effigy of a Bishop no longer applies, as the artefact has been removed . . . maybe by the National Museum?
Kilbunny – from the Gaelic, Cill mo Mhunna – the church of St. Munna, is believed to date back to the 8th century, but the present ruin dates from the 11th century. St. Munna’s feast-day used be commemorated on October 21st.  Maybe this annual event could be resurrected in Portlaw?
The now-well-worn narrow  Romanesque doorway is quite interesting, and to the left of the arch can be seen a sculpted head – maybe St. Munna himself – but now so weathered it looks more like an animal. Two other small carvings can be found, if you look carefully!
The ruined church, a national monument, is signposted on the Portlaw to Kilmeaden road, approx 2km from Portlaw, on the right-hand side, and is a very short distance up a side-road. An old cemetery with just about two headstones can be seen on the SW. side of the building.  A tall coniferous tree and a Yew tree are located at far side of the ruin.  Yew trees can be found in many old cemeteries, and were believed to ward off evil, a relic of our pagan past.
Two Bulláuns, irregular shaped stones with bowl-like depressions, can be seen outside the entrance. These, which can be found all over Ireland, may have well been used for the grinding of corn (as a mortar and pestle is used), and may have come from elsewhere.  They may also have served as containers for water, or collected rain-water, for ritual purposes.
The Bulláuns themselves remind me very much of Indian Grinding Rock State park, near the small town of Volcano, in California, which I had the pleasure of visiting in 1988 while on a 23-day tour of California with my late wife, Neansai, courtesy of Mr. Dan Sniffin, the then- President of Fresno Camera Club in central California.  A huge limestone  rock there had almost 1,200 depressions, which the native Americans (the Miwok tribe) once used for grinding acorns and other seeds. Here for the first and only time ever, I saw a Woodpecker!
Check out Indian Grinding Rock State Historic Park at:
www.nativeamericanencyclopedia.com
. . . also images of same via Google. As I write there are over 50,000 images of the park online!
Check out also:
www.dansniffinphoto.com
where you can see the excellent and inspiring landscape and abstract nature photography of Dan Sniffin.
Posted by Seán at 1:40 PM