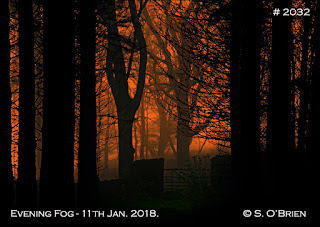 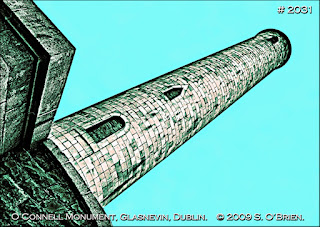 The Round Tower memorial over the tomb of Daniel O'Connell at Glasnevin cemetery, Dublin. Well worth a visit, the large tomb is below ground level, and is open to the public at times.  Within the tomb, with its colourful decorations and more, one can see a 'mensa' or table-tomb and a coffin within containing the remains of O'Connell. You can touch the coffin through an opening if you wish!
Entrance to the huge cemetery is free. Furthermore, access to the Botanic Gardens is available on the north (?) side of the grounds (free admission also!).  One could easily spend a whole day walking around both, there is so much to see. Food is available at both places. Car parking, for a fee, is available inside the entrance to the gardens. There is a fee to access the museum.
Check out info on the cemetery museum at:   https://www.glasnevinmuseum.ie/events/
Posted by Seán at 11:34 AM No comments: 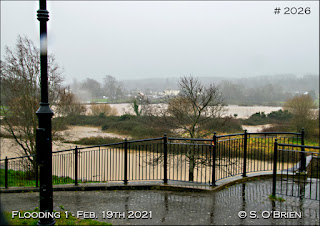 The Clódagh river lives up to it's name 'Clóideach' a few times each year, following heavy rain; its Irish name meaning - mountain torrent! There are a number of such-named rivers in the country. The name Bunclody is derived from same Irish description. 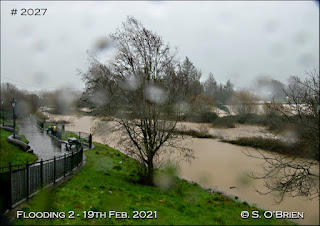 Following torrential rain on night of Feb 18th and continuing at times on the 19th, I headed out in such rain to see the anticipated flooding. The wind was almost blowing me off my feet; my brolly got quite a bashing, and raindrops were affecting my camera lens, as can be seen from above image; so I came home. 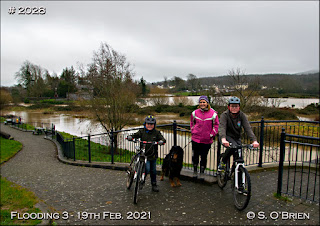 About 90 minutes later when the rain stopped, I came down to view the scene at the riverside walk, to find that the flooding had eased somewhat. This may well have been due to the fact that the tide was on the way out. Yes, the Clódagh is tidal as far as the now-defunct cotton-mill.
The above family, was one of the many groups who came along to view the scene during the day. 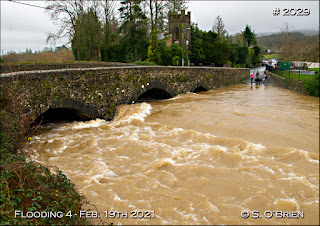 Still, the water was quite high at the bridge.. 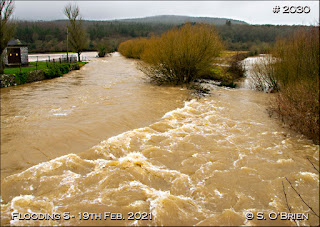 Looking up-river, the Clódagh on left and the cotton-mill canal on the right, plus the adjacent field, higher up on left, which was completely water-logged and had the water surging through it.
A most interesting, hour-long TV documentary (BBC) last night about the 1607 Bristol Channel floods, showed dramatic contemporary printed matter and illustrations. An estimated 2,000 people were killed in the disaster.  Experts seemed uncertain whether the floods were caused by a tidal surge or a tsunami. Lots about the event on Wikipedia. 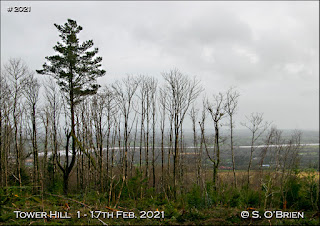 A walk in the Tower Hill area on Feb. 17th last, revealed a panoramic view of the river Suir from approx. Mooncoin down to Mount Congreve; the latter out of the picture on the right. All this due to recent harvesting of large, mature coniferous trees. 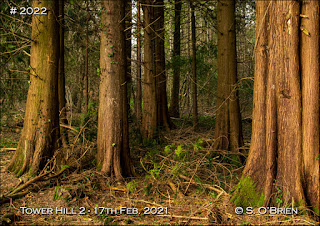 Those on the left here may well be harvested also quite soon! 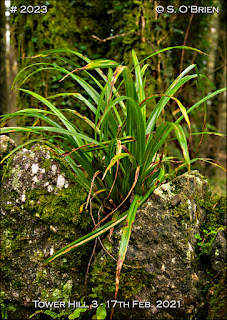 Ornamental grasses, obviously having escaped from either Milfort House or Curraghmore gardens, can be found by the adjacent roadside occasionally.  This plant found growing on the top of a Tower Hill wall. 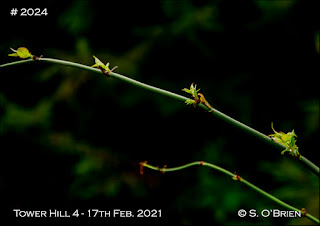 Pheasant Berry plants are plentiful in this area also, obviously having originated in same gardens. They are now coming back into leaf, with the arrival of Spring. 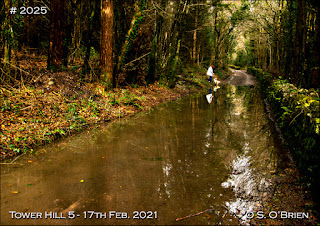 Finding my way ahead blocked with this pool of water, I was about to return until the lady in the distance suggested I by-pass it simply by going up to a higher lever in the wood, which I did, and enjoyed a total of 75 minutes walking.
Posted by Seán at 4:12 PM No comments: 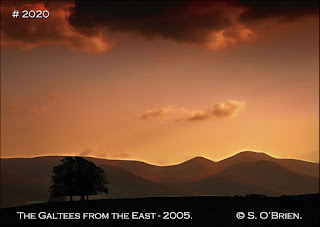 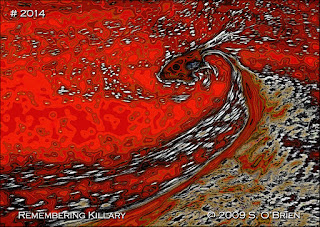 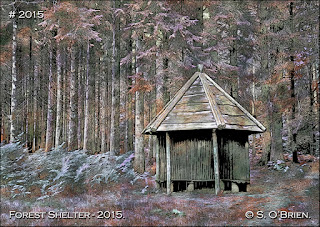 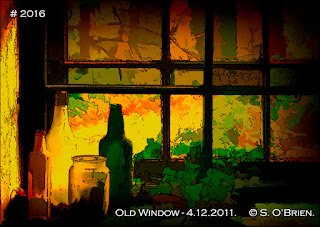 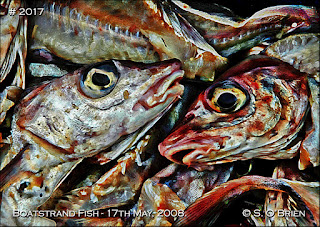 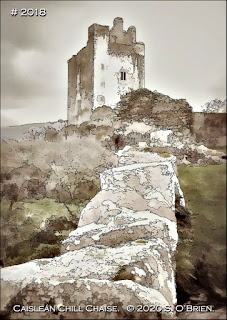 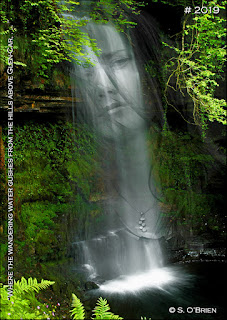 With acknowledgements to W. B. Yeats!
Posted by Seán at 12:51 PM No comments: 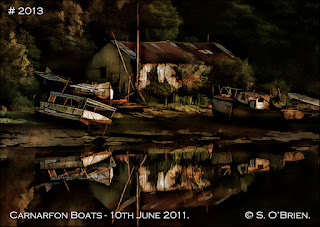 Adjacent to Caernarfon castle!
Posted by Seán at 11:42 AM No comments: 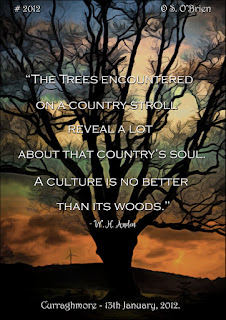 By co-incidence, last night's BBC4 programme - Life on a Mountain - about mountains in the Lake District (Cumbria, U.K.), included an account of W.H. Auden's stay in the 1930s at the hamlet of Westcoe, where his father, a Birmingham G.P., had a cottage.  Most of his poem ' Spain', and other earlier poems were written there after he returned from the Spanish Civil  War in 1937.  His poetry was widely published and second-hand copies are still available from many dealers.  BBC 4 shows interesting documentaries nightly.
Posted by Seán at 8:10 PM No comments: 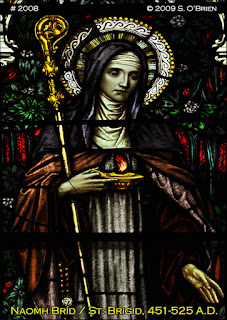 Lá 'le Bríde atá ann. Seadh, an céad lá d'en tEarrach! Yes, its St. Brigid's Day, the feast-day of one of Ireland's patron Saints, who lived from 451 to 525 A.D., when she died at her abbey in Kildare town. Its also the first day of Spring.
She was born in Faughart, County Louth, where there is a fine shrine to her.
Well worth a visit, when the country is out of lockdown!!!
The photo is of a stained glass window taken at
St. Margaret's Parish Church, near Dublin Airport on 30.7.2009.
-    oooOooo    -
Some Spring photos, taken today, hereunder: 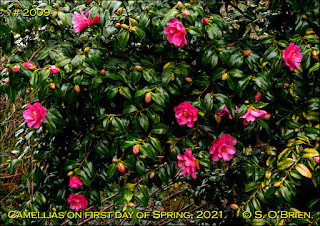 There are white Camellias also, but they are a little later appearing. 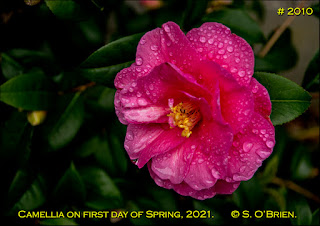 The Camellias immediately bring to mind the opera- ‘La Traviata’ – which literally means ‘The Fallen Woman.’ The delightful music was composed by Verdi and based on a novel and play by Alexandre Dumas in 1852 entitled - ‘La dame aux Camelías’ or ‘The Lady of the Camellias’, but I’m not going to discuss her reputation!

Apart from the famous song – ‘Libiamo‘ (The Drinking Song), my favourite melody and aria is – ‘Di Provenza il mar il suol’ (of Provence, the sea, the soil). I have played it at a few pub sessions! Listen to it on YouTube, which has a few versions.  Try the version by Placido Domingo, starting at 1 min 30 secs on the video to 5 mins 30 secs. You may prefer other versions, including a Karaoke version, instrumental version,  also sheet music! 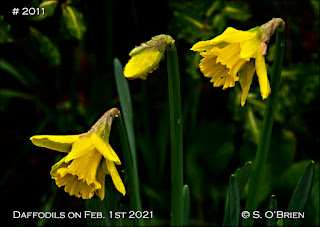 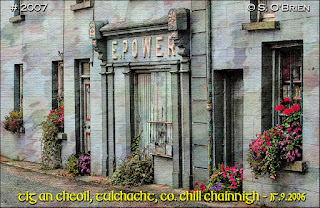 Photographed over fourteen years ago, when the pub was closed and the building was deteriorating somewhat, it was later restored and was turned into a thriving business once more, with much emphasis on traditional music sessions as in the past, many of which I participated in.  Then along came Covid-19, and not a tune since. Hopefully, the coming year will see changes!
It also contained a small grocery shop and post office in days gone by.
Posted by Seán at 12:53 PM No comments: