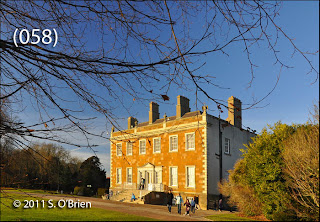 Newbridge House – not a Portlaw building, but one with strong Portlaw connections from  the past.
The house and grounds,  which I have visited a number of times during recent years, is associated with the Cobbe family, and lies adjacent to the village of Donabate, in north County Dublin; this photo was taken four days ago,  on January 3rd last (2011).
The first Cobbe, Charles, who came to Ireland from the south of England as chaplain to his cousin, the then Lord Lieutenant, in 1717, rose rapidly in the ranks of the church (Ch. Of Irld.), becoming Archbishop of Dublin in 1746. When he passed away in 1765, he was buried at Donabate cemetery.
Archbishop Charles was succeeded by his son, Thomas, who five years later married the wealthy Lady Eliza (Betty) Beresford. She was daughter of Marcus Beresford, 1st Earl of Tyrone, the first Beresford at Curraghmore, Portlaw, when he married Catherine Power, Baroness la Poer in 1717. This Cobbe/Beresford union produced three children, Catherine, Charles and Elizabeth Dorothea.  Lady Eliza’s portrait can be seen among the large collection of portraits at Newbridge House, which her wealth had helped to collect and accommodate. (You are not allowed to take photographs of the interior!).
The house and estate is owned and managed by Fingal County Council since 1986 and is open all the year ‘round, attracting a very large number of visitors.  Entrance to the estate is free but there is a nominal charge for guided tours of the house, which is well worth viewing with all its original furniture, paintings, statuary and fine plaster-work.
For further information check out the website:
www.newbridgehouseandfarm.com

The story behind the title - Earl of Tyrone - is quite complex and goes way back before the time of Sir Marcus Beresford. First holder was in fact Conn O'Neill, of the Tyrone O'Neills, who lived from 1480 to circa 1559. He had been granted the title by Henry VIII in 1542.  Succeeding him in 1587 was Hugh O'Neill - Aodh Mór O'Neill - believed to be the illegitimate 2nd son of Conn's son, Matthew. However, he forfeited the title after the Flight of the Earls in 1607.


In 1673 the title was created once more, this time for Lord Power of Curraghmore, and became extinct in 1704 when the 3rd Earl passed away.  It was once again created in 1746 for Marcus Beresford, 1st Viscount Tyrone, who was son-in-law of the last Power earl.
Posted by Seán at 9:02 PM