St. Patrick’s Church, high on a hill outside the town, was built in 1859 during the ‘reign’ of a Fr. John McGrath, to an Early English style designed by Dubliner, James Joseph McCarthy, who was considered the Pugin of his time. McCarthy, who lived from 1817 to 1882, designed numerous Catholic churches (over forty), monasteries, abbeys, convents, etc., including the nearby fine churches in Tramore,  Thomastown, Clogheen and Killenaule. The latter was considered his most impressive; a visit is highly recommended.
McCarthy also designed the cathedrals in Derry and Thurles, and finished the interior work at Enniscorthy cathedral, now an important tourist attraction, which Pugin had commenced back in 1841. 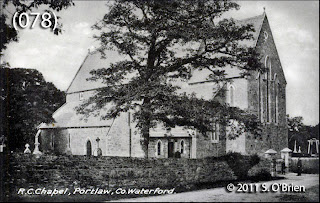 Note in the image above, a Lawrence postcard from very early 1900s, that there is no bell tower on the church, but there is today! However, on the right side of the church (the town side) you can just about discern a number of tall pillars in what is now the oldest part of the cemetery. On this cast-iron structure hung the church bell. The present-day bell tower was added in 1910 during the pastorate of Fr. Thomas Hearne, Fr.McGrath's nephew.
Compare this picture with image No. 018 on this site.
Why the bell tower was not included in the original building here is unknown.  Maybe it was due to insufficient funds. However, it is a co-incidence that neither was the proposed bell-tower at St. Mary’s Church, Killenaule. Instead, the bell there was erected on a cast-iron ‘stand’ similar to the one just about visible in the above postcard.  The Killenaule bell still remains in situ beside the church, on its original support, but an electronic device has now been put in place there which plays the music of a hymn at the times for the Angelus!
Posted by Seán at 1:51 PM