THOSE WERE THE DAYS

THOSE WERE THE DAYS!

Bealtaine is a time for appreciating the blessings we have received.  Memories of long ago provide us with endless pleasures of a different era.  As Wordsworth wrote about the daffodils; “for oft when on my couch I lie, in vacant or in pensive mood, they flash upon that inward eye, which is the bliss of solitude”.

I would like to take you back to the careless raptures of my youth. Our lives were filled with pleasures which were very simple but magnificent.  It was a time of ration books, rumours of war, with nothing to entertain us except our Pye radio powered by two batteries.  There was the “dry” battery which cost 17/6d and a “wet” battery which had to be charged every three weeks.  We lived in a cottage in Curraghmore Estate and it was my job to take the battery to Mikey Cullinane in the Courtyard to have it charged.  The cost involved was 6d.  The “dry” battery was sometimes heated in the oven, as my father thought this would prolong its life.  There were always rows over the radio as I grew up.  My father .wanted to listen to “Din Joe and Take the Floor” and I wanted Radio Luxemburg – Dad usually won. 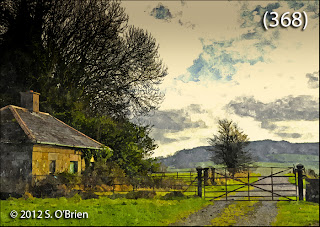 Farm Lodge - the now-defunct cottage referred to above.

Our main form of entertainment was the local Cinema at the Premier Hall.  John Walsh owned the Cinema and showed films twice a week, with a matinee on Sundays.  We would run down the Chapel Hill after Mass on Sundays and look at the poster outside John Walsh’s house.  The name of the picture and the actors were highlighted, followed by the full supporting programme.  This usually included the Three Stooges, so much so that the “Smart Alecs” in the tannery suggested that the three lads lived with John and his sister Theresa!

On Sundays, I often ran up through the Farm Yard by Mother Brown’s to collect William Hickey, who lived in the cottage at Clonegam next to the Protestant Church.  We would then run down the back road to Portlaw, collecting Billy Rockett on the way.  We all had switches (small sticks) which we would use to strike our buttocks with – these were our imaginary horses.  We paid 6d to Theresa and took our seats in eager anticipation.  Today’s film was in glorious Technicolor, which was a treat in those days as most of the films were in black and white.  The lights flickered and the performance began.  The supporting programme consisted of a newsreel; war in Africa, famine in India and highlights of the All-Ireland, which was played months ago.  We all got impatient with the travel programme and laughed at the Three Stooges and Joe McDoakes - The Man behind the Eight Ball.  Half eaten green apples hurled past my ears – the same green apples that disappeared from Morleys’ and Medlicotts’ that morning.  Flash lamp light lit up parts of the hall, as Theresa tried to identify the culprits.  Then came the main feature, often a cowboy picture.  We rode with the cowboys and cheered when the Indians were killed.

An old couple, Willie and Mary Fanning, loved the pictures and always sat amongst us.  Mary lived every second and was frightened for the family under the wagons as the Indians closed in and ammunition was low.  “Willie” she cried “do something Willie or they will all die”.  “Easy there Mary the Calvary will come and save them”.  Just then the bugle blew and we all cheered and Mary put her handkerchief away.

The show always ended with the National Anthem and we all stood waiting for the stampede.  Half way through the chorus the door would be forced open and we were on our way home.  Our horses were tired on our journey home and wearily we trudged home happy with our lot.  We had very little, but what we had meant a lot.

Always remember, contentment is an invaluable commodity and we had it!