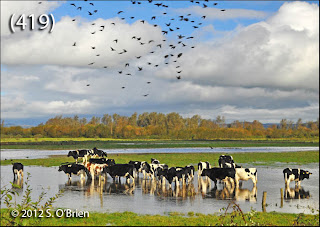 Animals at Darrigle, Portlaw, this morning, surrounded by water when the tidal Suir burst  it’s banks.  A flock of starlings overhead was  enjoying it all. The extent of the flooding is not obvious from ground level.
Next time, I'll hire a helicopter! 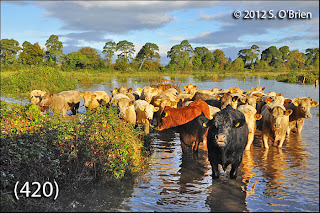 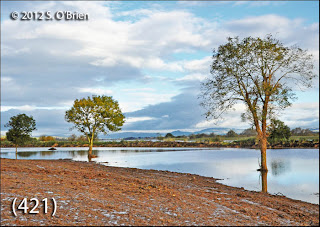 A new landscape near Pouldrew,  where much land reclamation work has been taking place in recent weeks.  When the river Suir burst it’s banks nearby following heavy rain and high tides, large areas of countryside around Portlaw were badly flooded and traffic detours were in force.  Some drivers had to be rescued. One lady found her car afloat near Carney’s/Kearney's  Bridge and had a miraculous escape!

The Walsh Mountains in the background here. 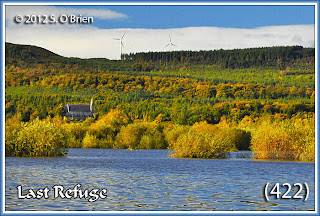 A further picture from the recent floods series.

Portlaw appears to have disappeared beneath the recent floods, with only St. Patrick's Church surviving, because of it's elevated position above the town.
Maybe the church will be our last refuge when a tsunami comes up the tidal rivers Suir and Clódagh!
Yes, a huge tsunami is forecast for many places, including south-east ireland when a certain volcano eventually erupts in the Canary Islands!
Read all about it by typing into Google:  canaries volcano tsunami

One left click on most images will enlarge them.
Posted by Seán at 1:40 PM