The Nativity,
depicted in stained glass at Thomastown's
Church of the Assumption, County Kilkenny.

Churches worldwide will celebrate the Nativity,
with beautiful cribs, large and small.

Portlaw's St. Patrick's Church,
will have it's ever-popular large crib, which will be
officially opened at this evening's Vigil Mass.

Probably the most unusual crib in the country,
and well worth travelling to see, will be
the MOVING CRIB, Dublin, which can be visited at
42 Parnell Square West, Rotunda, Dublin.
It's a sight to behold!!!
Check out website first at:  http://www.stmartin.ie/crib/

. . . and an exquisite nativity window in
The Church of the  Immaculate Conception, Kingscourt, County Cavan,
by the Clarke Studio, Dublin in the 1960s. 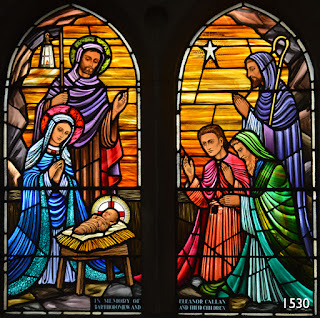 Kingscourt = Dun a' Rí = the Doonaree in the famous song of many years ago!


Such reenactment pantomimes became hugely popular and spread throughout Christendom. Within a hundred years, every church in Italy was expected to have a nativity scene at Christmastime.Eventually, statues replaced human and animal participants, and static scenes grew to elaborate affairs with richly robed figurines placed in intricate landscape settings.Charles III, King of the Two Sicilies, collected such elaborate scenes, and his enthusiasm encouraged others to do the same.


The scene’s popularity inspired much imitation in Catholic countries, and in the Early modern period sculpted cribs, often exported from Italy, were set up in Catholic churches and homes. These elaborate scenes reached their artistic apogee in the Papal state, in Emilia, in the Kingdom of Naples and in Genoa. By the end of the 19th century nativity scenes became popular beyond Catholic settings, and many versions in various sizes and made of various materials, such as terracotta, paper, wood, wax, and ivory, were marketed, often with a backdrop setting of a stable.   (off WIKIPEDIA). 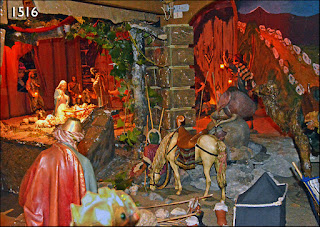 Above:  A mixture of modern and 19th century Austrian figures.
One of the finest cribs around must surely be that at the Church of the Holy Cross, Tramore, Co. Waterford.
Donated in the late 1800s by the Empress of Austria (?), the wooden (?) crib figures originally amounted to approximately one hundred. In recent years the number has dwindled to about twenty, and these have been included in a Nativity scene with modern plaster (?) figures.  Those figures from the past are quite large and most life-like.  A visit is highly recommended. 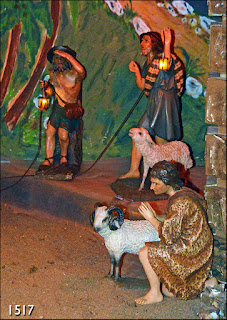 Above:  Some of the original Austrian figures.

While there, it’s worthwhile studying the many large stained glass windows and the huge quilt-like tapestry on the chancel back wall. The Gothic Revival style church was designed by one of the leading architects of his time – James Joseph McCarthy, who designed many other churches including nearby Portlaw, Clonea-Power and Killenaule. The building commenced in 1856 on land donated by Lord Doneraile (St. Leger), a name associated very much with Tramore.

(When using Blogger, the alignment of pictures and text can sometimes not turn out as hoped for.  Also, if typing lengthy articles, like the above, and you type initially into a WORD document, your work, when transferred to your Blog, can end up in a ticker-tape style. Thus the above problem, which now needs to be re-typed directly into the Blog!)

A nicely-housed crib
at
Dunhill Church. 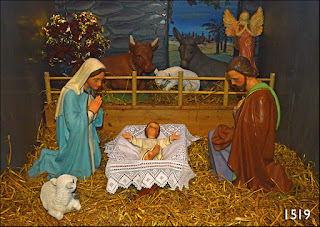 A large crib,
which is surrounded with
many stuffed or plaster
birds and animals
at
Fenor Church,
County Waterford. 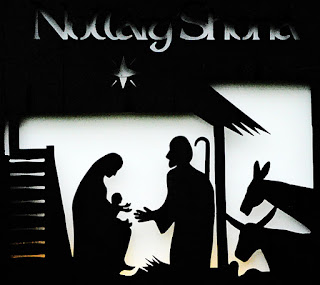 A nativity scene
depicted in silhouette form,
outside the main door
of the same church in
Fenor.
Best seen when lit up from the rear during darkness. 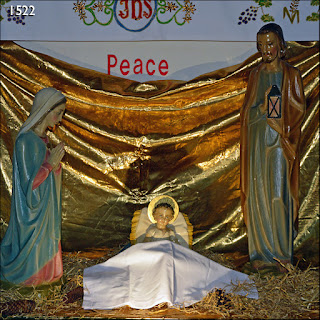 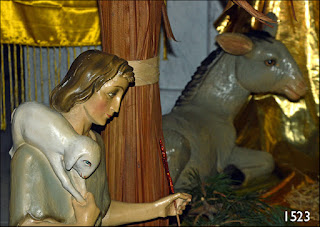 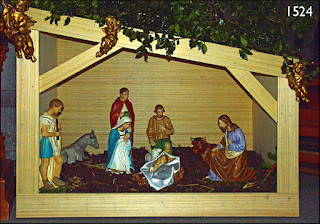 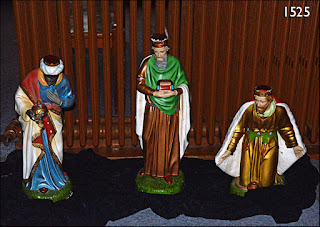 The three Wise Men awaiting their inclusion in the Clogheen Crib on January 6th. 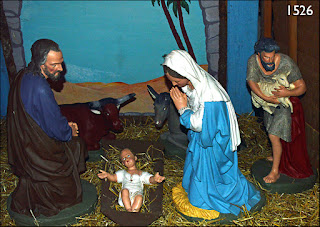 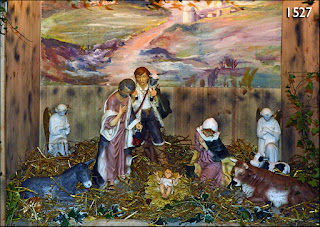 This beautiful one at Ballylooby church.

Images 1522 to 1527 taken on a Suir Valley Photographic Group outing.
Much of the fine stained glass in the above churches was also photographed same day. 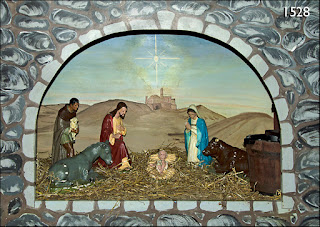 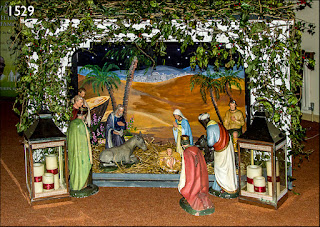 A special 'Thank You' to the Kilsheelan gentleman
and the Newtown lady met at Newtown Church
for the enjoyable conversations and useful information! 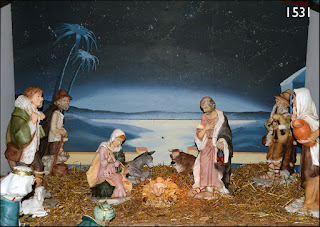 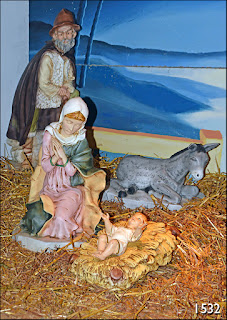 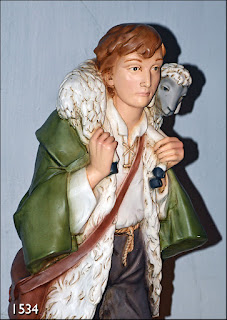 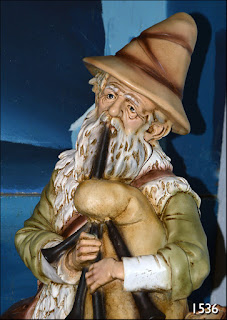 A
quick glance
at
these bagpipes,
suggested they might be
GALICIAN.
Such pipes are heard occasionally
on RTE Radió
trad music programmes.
Suggestions welcome!
Maybe the figures were made in Spain?
The headgear might well be a clue? 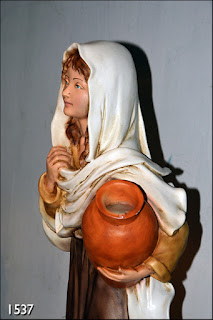 A
'Water Carrier'
in a
Christmas crib!
Most unusual, surely, but a search for water carrier crib figures on the Internet showed one company supplying a female figure carrying two buckets with a yoke on her shoulders. A further search revealed that water carriers were quite common in China up to the 1400s. Then again, we are quite accustomed nowadays to seeing young African children on TV, who have to travel miles each day to source and carry home water, usually depicted as being polluted.
On the other hand this water carrier may well be carrying a jar of wine to celebrate the birth of Jesus?

A single left click on any image will show an enlarged copy.