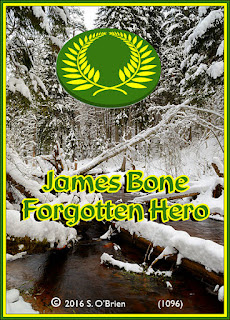 Wednesday, August 12th last (2015), was one of those pleasant warm days of summer, as I walked by the local library, when I noticed two ladies reading the tourist information panel on the footpath nearby. I approached and asked if they needed any assistance, whereupon a most interesting story unfolded of a local hero and two sad deaths from the early 1900s.


The ladies in question, Kate Hunt and her daughter, Alison, were over here from the U.K., researching the background to the demise of Kate’s grand-father in Portlaw, almost one hundred years previously. 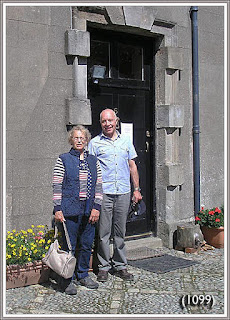 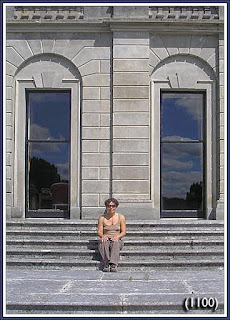 The grandfather, James Bone, a native of the U.K., born in 1868, said Kate, who was butler/house steward at Curraghmore House since 1891, died some days after attempting to save local boy, George Clarke, from drowning in the ‘Salmon Pond’. Presumably this means the ‘Salmon Leap’ on the Clódagh River, but a later report says the accident happened on the lake! Young George had been skating on the ice. Yes, rivers do freeze over, like the nearby Suir at Fiddown Bridge did one night about three years ago! Regrettably, George Clarke passed away during the incident, but James Bone, who already had a heavy cold, developed a serious bout of Pneumonia from exposure to the chilly waters of the river, and died a few days later.

An item in the Munster Express of January 6th 1917, supplied by Kate, is shown hereunder: 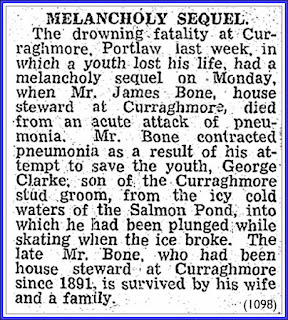 More than likely, Jim Bone’s bravery was never publicly acknowledged. Nowadays, he would be awarded a bravery medal and much would be made of the incident in the newspapers, radio and TV. It’s still not too late, for someone out there to delve more deeply into the affair and do something about this local hero, who had worked at Curraghmore for almost twenty-six years.

Kate Hunt was fortunate in acquiring info on her grand-father’s death in the Irish Civil Registration Index, which was originally recorded at Carrick-on-Suir. See copy hereunder: 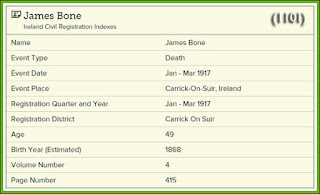 However, Kate was unable to locate the grave of James Bone. If he was buried at Clonagam cemetery, where she was shown by Basil, the estate guide,  she was unable to check out all the headstones due to the volume of undergrowth. Having no further details on the man or his family, she would appreciate receiving any information that some of you viewers out there may have. A photograph of the young James and his siblings is hereunder: 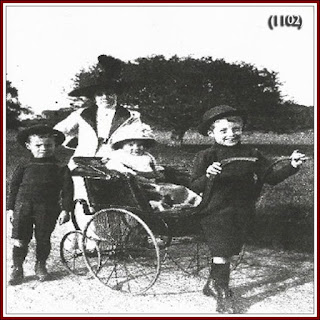 Kate supplied me with an excellent photo from 1905, showing the entire Curraghmore House staff, nineteen in total, posing at the front of the building.  This consisted of seven gentlemen and twelve ladies all dressed in their very best, posing for the photographer, possibly Poole of Waterford. Three ladies were all in black plus nine more, all in white. One of the gentleman was dressed all in white and wore a chef’s hat. Regrettably, I’m unable publish such photo here for copyright reasons.

“Now Bone was an institution more than a butler”, and they took him on holidays to Italy and Egypt. She also describes boys coming home from school, taking a short-cut over ‘the lake’, the ice breaking, one falling in, others rushing for help, and “Bone, who had a severe cold in his head, never hesitated for a moment, but rushed straight out and plunged in.”

She continues, remarking on the ‘crushing blow’ Bone’s death was to all, even to herself and her sister, Susan, who had their own houses then, and still further nice remarks about the brave Jim Bone.

Clódagh Anson was the daughter of John Henry de la Poer Beresford, 5th Marquess of Waterford, and his wife, Lady Blanche Elizabeth Adelaide Somerset. In 1901, she married Hon. Claud Anson, son of the 2nd Earl of Lichfield, Thomas George Anson, and Lady Harriett Georgina Louisa Hamilton.  She passed away on 17h April 1957, at the age of 77, and was the author of a number of books. I'm glad to say I have a copy of 'Book'!

I am grateful to Kate Hunt for this great story, and appreciate very much receiving the photographs, etc., mentioned. Hopefully, some further useful information will emerge in the near future.

The 'Munster Express' item and the Civil Registration item were both kindly supplied to Kate by Ms. Sharon Meade of Waterford Council; the former being found at Waterford Library.

Further info on the Bone family, supplied by Kate Hunt:

Incidently - our James Bone's father was the natural son of James Bone and Susan Dean of Dundonald, Ayrshire, Scotland.  He was born in 1843, raised by his mother and her parents (in their 80's!) and by 1861 was appreniced as a gardener at Kilwinning in Ayrshire.
By 1871 he was a gardener at Aldridge, Staffordshire  and has a wife and 2 children including our James.
In 1877 his wife  died and he had 3 more children.
By 1881 he had re-married and had one more child.  By this time he was head gardener at Ashdown Park in Berkshire.  Our James was 13 and still at school.
By 1891 - he was head gadener at Latimer in Buckinghamshire and our James has disappeared from the census (we assume that he was in service somewhere).
The 1901 and 1911 censos  shows him as gardener at Tredegar Pak Gardens in Newport Monmouthshire.  So he didn't do badly for a fatherless boy from Scotland!

Our James re-appears in the Irish 1901.census.