After 6th storm of the season! 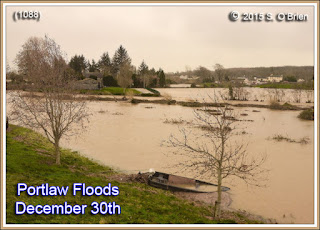 The view from Bridge Street, towards the bridge (out of view near top left), with 'The Manse' just about visible behind the trees on the top left also. Here in the foreground, the Cotton Mill canal and the river Clódagh are just one, more or less.  The flooding, from weeks of rain, extended into fields beyond this scene, and covered a wide area in Coolfin and Darrigle areas. This scene was repeated nationwide, but much worse in many other towns, villages and rural areas. As I type this on January 1st, the weather situation continues to worsen, and may last about three more weeks according to the Met office! 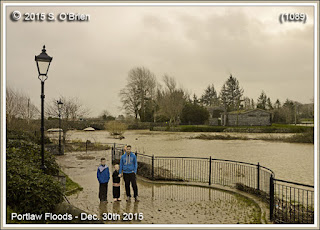 Cian and Evan Mullowney, with their father, Jonathan, at the riversidewalk. 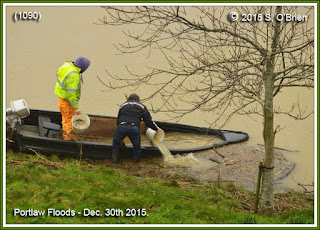 John and Martin Heffernan baling out their boat at the canal side. 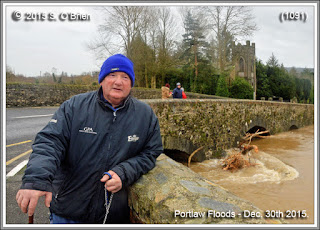 Paul Kelly by the bridge, where the water here had already subsided somewhat. 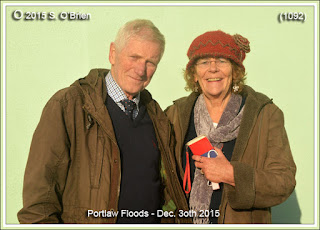 Seán Walsh and Mary Forsey
just two of the many who came to the bridge area to see the floods. 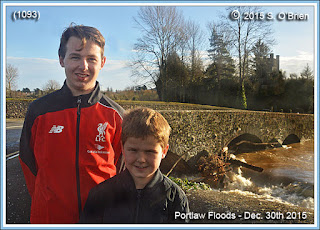 The Walsh brothers who live close to the Clódagh, but on somewhat higher ground. 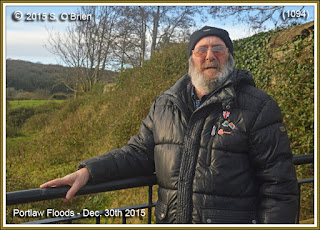 David Cohen, popular local personality, well wrapped up for the weather, surveying the scene from the Green Island footbridge abutment. 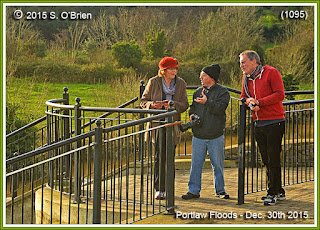 It's that lady once again, Mary Forsey, photographing everything in the area,
chatting here with John Roche of the Suir Valley Photographic Group,
and her husband, Frank, on extreme right,
as they overlook the area from the Green Island footbridge abutment,
which was restored a short few years ago.

Three days later, the flooding has eased considerably at Portlaw.
This shot taken from the bridge, showing the Clódagh overflowing into the now-defunct  cotton-mill canal.
Meanwhile, the entire Suir valley is seriously flooded, affecting all towns adjacent to it. 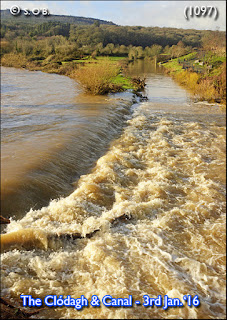 (one left click on any image will show an enlarged version)