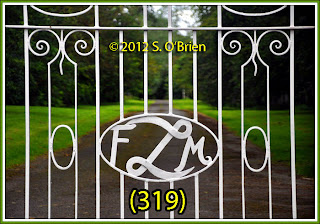 Remember that competition I announced back in August 2012 re the monogram on a gate, obviously  leading to some house or large estate, which I said had strong Portlaw connections?  Well, in fact, I myself didn’t know, and still don’t know, what the monogram stands for, and there was no one out there coming up with any suggestions either. One lady informed me verbally, however, that it might have a Lemass connection. A great guess, as the Lemass family certainly had a close connection with the place, the house and estate owners up to recent years being  none other than the late Taoiseach, Mr. Charles J. Haughey and his wife, Maureen Lemass, daughter  of a previous Taoiseach, the late Mr. Seán Lemass.
Mr. Haughey purchased the house and  260-acre estate, back in 1969 for £120,000.  The house in question was, of course, Abbeville, located in Kinsaley/Kinsealy townland, south of Malahide, Fingal County.  The house prior to 1969 was, I’ve been told, called Abbeyville House, and may have been a stud farm. The original name, Abbeyville, may have been chosen  very many years ago, because it is located quite near the ancient St. Doolough’s church, the oldest stone-roofed church in continuous use in the country.  That church belongs to the Church of Ireland community and is in regular use. I availed of a tour of the quaint building after service there one Sunday  in mid-August last (2012).

But it’s the strong  Portlaw connection that we are interested in here!
More about that when I've time to type from my scribbled notes!

The competition closing date was October 31st 2012, but I will still give an A4 copy of any photo on this blog, on archivally-permanent material, to the FIRST viewer who sends me the answer . . . what the monogram stands for.