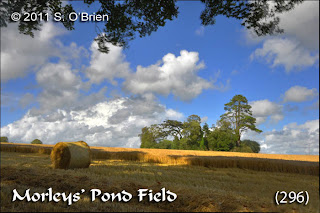 Little remains now of the once-magnificent Morley/Malcomson-owned residence,  Milfort House, that once stood in this area . . . just out of the picture on top left. I will  endeavour to put a small few images on this page, especially for those Morley descendants, whom I know will be keeping an eye on this site now, because of  contact made with one of them - Chris Morley!

This picture, taken end of last summer,  shows a tree-surrounded area known as Morleys' Pond, which I believe was a once-beautiful large ornamental garden pond, approached by a path from the front of the house. One local told me some years ago that he heard the path was lined with statues, obviously of the classical kind.  The area has now 'gone wild' , and on visiting it two weeks ago, I discovered the pond had dried up completely, obviously because of recent weather conditions. Many specimens of withered reeds could be seen - Reed Mace.  A small number of fine trees can still be seen here, and it's surely a haven for wildlife.

Picture No. 110 on this site, is part of the same extensive field.

Before the collapse of the Celtic Tiger era, an entire new town was planned for this elevated site in the townland of Coolroe, consisting of many houses, apartments, offices, filling-station, health centre and more. It never materialised.  Some people were quite pleased!
A special welcome today to Martha Bolger-Bergin from Kilkenny who has become fascinated by the Malcomson story since visiting Portlaw and the ruined Mayfield House recently. As I type, the number of page views on this site is just a few short of 14,500 from visitors in over 60 countries worldwide.  All in a period of 57 weeks approx. Thank you, Martha! 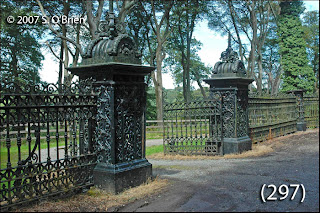 Part of the magnificent entrance gates to the former Milfort House - the residence of the Morley-Malcomson family. It is quite possible that the cast-iron gates and extensive railings were manufactured at the Cotton-Mill, where it is reputed the Cotton Mill & Mayfield House entrance gates and railings were produced.
Regrettably, not too many years ago, these items 'disappeared almost overnight', as I've been told, and were sold to the then-owners of Woodhouse Estate, Stradbally, County Waterford, where I have photographed them on a number of occasions.   I was fortunate to have seen the gates, even though in a very rusty condition, in situ at Portlaw, some time before they were sold. 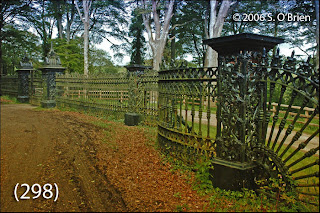 As can be seen, the railings and gate were quite impressive.  A little over half of the construction can be seen here. 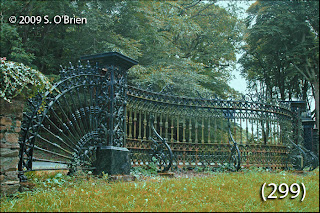 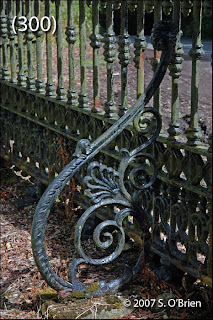 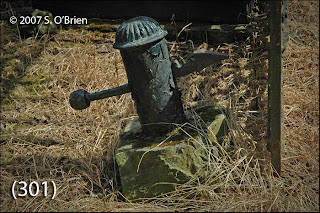 Device for keeping gate in an 'open' position, now out of alignment. 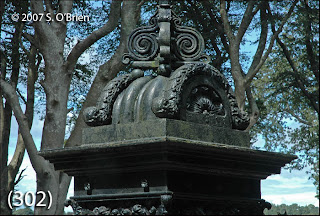 Top of one of the gate pillars. It's quite possible this carried a gas-light as did the Portlaw fountain. 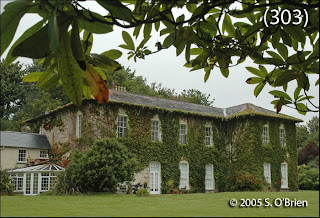 Woodhouse, Stradbally, County Waterford, whose entrance the Milfort House gates now adorn!
This house, originally built in the early 1500s, was once a Fitzgerald residence, followed later by a Uniacke family and then inherited by a branch of the Beresford family. The last Beresford owner was Lord William who disposed of the property circa 1970.
The above is one of a series of pictures taken in the Woodhouse estate with permission some years ago. 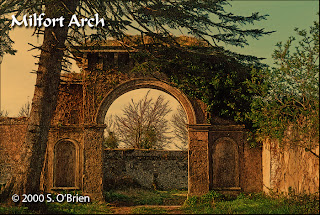 A magnificent arch at back entrance to Milfort House. Picture taken in the year 2000.
This feature has been described in a Portlaw Conservation Plan (revised final draft, Jan. 2003) as 'a farm entrance designed by  Mulvany*, in the form of a Roman triumphal arch'. It further states that this , also a garden folly, a tree-ring, and farm buildings 'remain vulnerable to deterioration and complete loss'.
The entire area around the site of the former dwelling house is literally no longer traversable due to huge amounts of rubble having been dumped all over the area. Where this rubble originated is unknown. The garden folly, mentioned in the plan, quite visible in 2000, can no longer be seen. It may well be hidden among the bushes, which now grow profusely, at the edge of the large rubble-strewn area. The 'tree-ring' mentioned, must surely relate to the trees which surround the so-called Morleys' Pond.
*John Skipton Mulvany - famous 19th century architect.
N.B.  Milfort House has been called 'Milford House' in the above mentioned Development Plan.

The above photo of a field in the townland* of Coolroe, has what is almost certainly a ring-fort near the top, right of centre. The high trees behind it and to the right of it were bounding Milfort House and gardens. Immediately behind these is an old laneway (name ???), used, I've been told, by horse-drawn coaches in the past, possibly linking both Curraghmore and Milfort House with the bridge across the Suir at Fiddown.
The Portlaw Conservation Plan, mentioned above, states:  'Only one archaeological field monument (a possible ringfort) has been identified within the confines of the Historic Place (i.e. town of Portlaw)'.
It may well be that the house name - MILFORT - was derived from the words Cotton-Mill and Ring-Fort? This is just a theory of my own.
The above photo was taken in the month of September in 2009. As far as I can remember, the land was being prepared then for a crop of daffodils the following year. I have no further pictures, at present,  in this series relating to the Malcomson-Morleys.