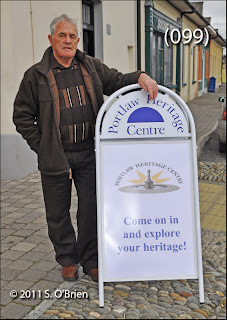 Saturday, March 19th, was an important day in the life of Portlaw, when three impressive signs depicting the heritage of the area, both natural and built, were unveiled.
Here, Johnny Crotty of the Heritage Group eagerly awaits the arrival of visitors at the Heritage Centre. 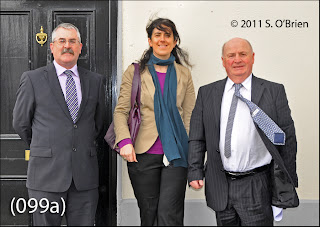 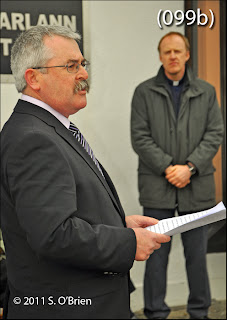 The introductory speech by the Heritage Group Chairman - Ger Crotty. 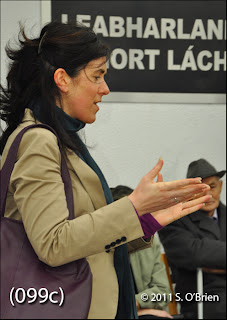 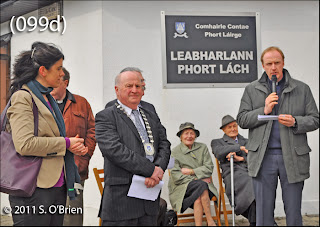 Rev. Ned Hassett, C.C., addresses the audience and blesses sign No. 1, at An Leabharlann/the Library. 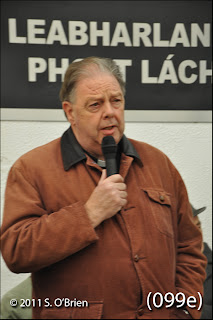 Local Rector, and Rector of the Fiddown Union of Parishes (Ch. of Irld.), Canon George Cliffe,                  addresses the audience and again blesses the sign. 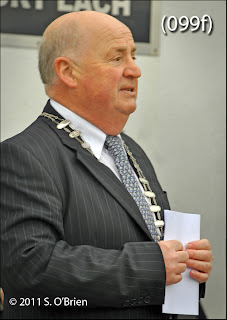 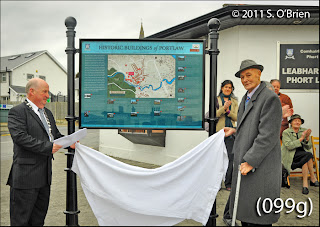 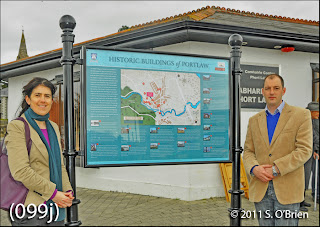 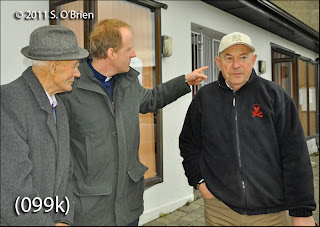 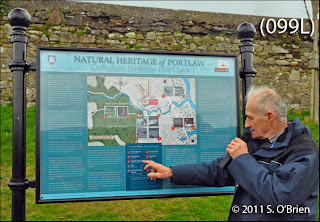 A walking tour of part of the town was led by local historian, Mr. Willie Power, who also commented on the various places of historic or heritage interest.
Here he remarks on sign No. 3, devoted to natural heritage, down by the new riverside amenity area. 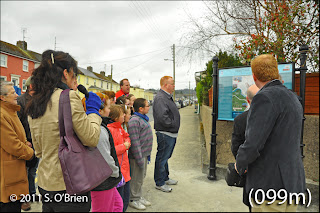 Sign No. 2 at the junction of William Street and Queen Street. 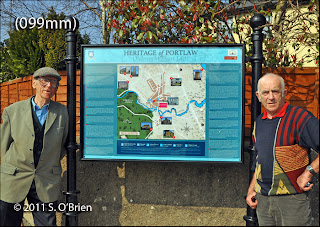 A better view of the same sign a few days later,
being discussed by Paddy (Doc) Morrissey and Hugh Maher. 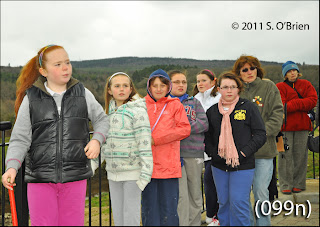 "Mol an Óige . . . . . . "
Willie Power had a youthful listening audience by the canal side when he spoke about the history of the canal, which enabled lighters to carry bales of raw cotton from Waterford up the Suir and the Clódagh rivers to the Malcomson Cotton Mill at high tide.
As is evident, it was a cool breezy day!

Enjoying a joke with Fr. Ned Hassett (out of picture on R.) were Eileen Coffey and Maurice Nugent.

Group outside the Library awaiting the start of proceedings.

Tommy Comerford, well-known professional singer, and daughter, outside the Library.

Someone had to hold the sheet in place, before the unveiling,  because of the wind;
who better than Eoin Coffey.

Having retired to the Heritage Centre for refreshments, visitors spent about an hour having a look at the photographs and artifacts on display.
Here, some young people were intent on putting their names in the Visitors' Book.

At the Heritage Centre, Willie Power and George Canon Cliffe listen intently  to what was the first official speech  by Paudie Coffey of Portlaw, newly-elected T.D. (Member of Parliament).

Enjoying the fine display at the Heritage Centre.

Refreshments for all visitors at the Heritage Centre afterwards. 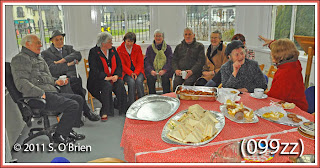 Some were addicted to Cup-Cakes . . . the latest 'craze'.
Maybe there's a secret ingredient?
Posted by Seán at 11:51 AM