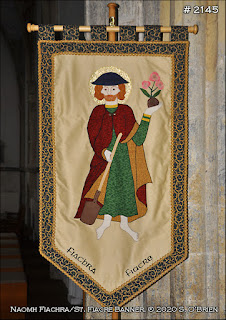 Tomorrow, August 18th, is the Feast Day of St. Fiacre.

St. Fiacre/Naomh Fiachra  (of Breuil in France – as there were two others of same name) was born in the year 600 approx.near Bennetsbridge, Co. Kilkenny.  He became a priest, an abbot, a hermit and a herbalist  and also ran a hospice for some years. He is the patron saint of gardeners, herbalists, taxi-drivers, florists, also victims of hemorrhoids and venereal diseases, and even more.  He died in the year 670 on August 18th. He is venerated by both Catholic and Eastern Orthodox churches. He is reputed to have founded the village of Graignamanagh, in which is located DUISKE ABBEY, founded by Cistercians in 1204 A.D.  Following suppression in 1536, it was used for some years by the Church of Ireland, but was returned to the Catholic community in 1812. After being in ruins for many years, it was fully restored in the 1980s.  The above processional banner was photographed there. The abbey also includes a life-size statue of him.