An August Evening in County Tipperary. 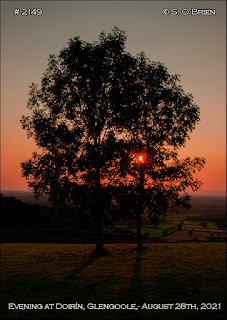 Making use of the long spell of great weather, my colleague, J.R., and I spent quite some time last Saturday, first at Derrynaflan island, in Co. Tipperary, where that famous chalice and more was found; then on to Lough Doire Bhile, now being called Lough Doire Mheille.  The area was crowded with many people swimming, sun-bathing, walking, fishing, picknicking, etc., so we left and headed up to Doirín, aka Dereen and 'The Reen', which offers a fine view over much of north Tipperary.  North Tipp's distant mountains can be seen on the horizon, and Keeper Hill, near Nenagh, can be seen immediately behind them on the extreme right of the photo. 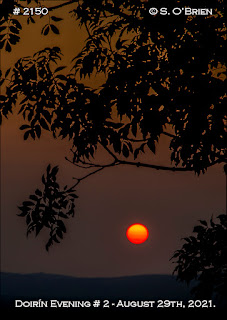 We waited on for some time until the sun dropped lower in the sky, and had the pleasure of meeting a lady (a science teacher) who had been coming there numerous evenings, sitting in her chair, and photographing the sun as it began to drop behind the mountains at a slightly different place each time.  Her photos, she said, were for use with her pupils.  A perfect end to a perfect day, while observing the planet Jupiter and two stars behind and to the side of it, from Grangemockler homewards, which formed an interesting triangle in the sky, something I have never noticed previously. Thanks to my daughter, Fionnuala, for that bit of astronomical info!
A single left-click on most images will show an enlarged copy!
Posted by Seán at 11:56 AM