The Story behind the Tower Hill monument: 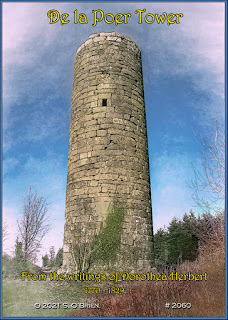 Dorothea’s father was Church of Ireland rector in Carrick-on-Suir for some years. Spelling, capitalization, punctuation and spacing has been retained. The use of hyphens has also been retained, as in the original. This excerpt was written in 1783.

Mr. Carshore* soon became such a favourite at Curraghmore that he seldom came as formerly, to play Backgammon and dine on Beans and Bacon here – He was established in the Curraghmore business by his Intrinsic Cleverness particularly display’d in attending Lord De La Poer, Lord Tyrones Eldest son Who fell from his Horse leaping The Iron Rails of their Court yard just as Lady Tyrone was stepping into her Carriage to dine out – She saw her charming Son fall and in  few Minutes he was brought up stretched on a door almost lifeless-He died in a few hours-He was a beautiful young Man just grown up and adored for his humane and Charitable Disposition.

The same year died Miss Beresford Daughter of Commissioner Beresford – she was niece to Lord Tyrone a beautiful young Woman-and Mr Polier Lord De la Poers Tutor and Bosom Friend-The three Deaths happened within three weeks-They were all buried in Clonegam Church in one grave-1778-One Very handsome Monument commemorates this fateful Event-And describes the affection the Victims bore to each other-Soon after a grand and beautiful Obelisk was erected on one of highest Hills at Curraghmore which rivals ancient Architecture in its Colossal Height & Dimensions _ What made the Catastrophe More Affecting was that Lord Tyrone and his Brother received at once The News of their childrens Death at the Waterford Election where Mr Beresford sat as Candidate-To describe the Distraction of the two parents would be impossible-And the same election was rendered still more ominous by the death of Mr Power Son to the opposing Candidate who was killed in a Duel.

1783 The Bank of Ireland was established And the Order of St Patrick instituted-Lord Tyrone was one of the Knights and was soon after made Marquis of Waterford-But it made up poorly for their recent loss though the Whole Beresford Family immediately got into power And soon arrived at the Acme of Worldly grandeur and prosperity-Curraghmore shone with encreased Splendour if possible-But whenever My Father and Mother dined there En Famille. The Noble Owners gave a loose to their feelings on the Woeful loss they had sustained.

*Mr. Carshore was the local doctor and apothecary.