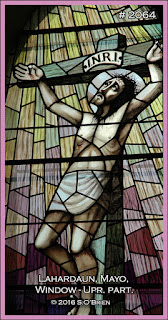 FOR THE WEEK THAT'S IN IT 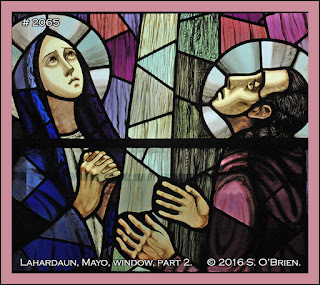 The village of Lahardaun (aka Lahardane),  Co. Mayo, produced a number of surprises when visited in March 2016. First of all was the friendliness of the people, shortly after arriving there; one offering to bring us on a tour of the area, the second filling us in on local history, and inviting us to his house for tea!  Next surprise was visiting a local park dedicated to  fourteen people from the same townland in the area, who all had been  emigrating on the Titanic. Three or four survived, one of them becoming a nun, the others all drowned. A fine park, with information panels and effigies galore, all in copper, is quite an amazing place.

Next surprise was the stained glass windows in the local R.C. church, depicting the Titanic tragedy, but of even greater interest was one devoted to St. Patrick and then one remarkable single-light one depicting the Crucifixion.  The windows were installed by the Myles Kearney & Son Stained Glass Studio from Dublin, which was a branch of Myles Kearney and Son, Waterford, natives of Portlaw! The extremely talented glass designer was a Mr. James Cox a native of Rooskey, Co. Roscommon, who worked with the Kearney company from when he was a teenager. The crucifixion window was remarkably tall, and had to be photographed in two sections from an angle because of an obstruction in front. This problem was sufficiently overcome with the help of Photoshop.  The artwork in this window is probably the the most outsanding I've ever seen, and I've viewed stained glass all over Ireland, England, Wales and Scotland, and work from some continental studios.

Then, we discovered the village had a new whiskey distillery, but, beng Sunday, or was it a bank holiday Monday, the premises was closed. The distillery name was NEPHIN WHISKEY. Their website:

A pleasant and interesting place to visit, with plenty of other historic places and superb landscapes nearby.