Despite having received emails during storm OPHELIA about the safety of people in this area
from distant concerned friends and blog followers in Canada and the USA, UK.,
Dublin, Waterford city, and more
I wasn't aware of what was happening as I heeded the national warnings
to stay indoors, and just had a short look around today (Tuesday).
Plenty of debris from trees was to be found everywhere,
and all trees that had fallen across roads had already been cut up and disposed of. 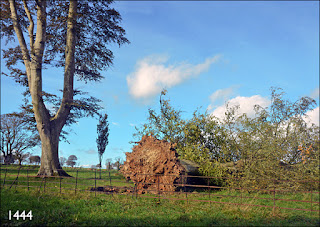 A number of trees had fallen on the Portlaw to Clonea-Power road.
Entering Curraghmore estate at Whitestown Lodge,
much tree damage was evident,
and the above tall Beech, nearer to Curraghmore House,
was one of the casualties.
Further fine Beeches were down inside the main entrance to Curraghmore,
one near Coe's Lodge, and two great tall ones just about 100m from
Clonagam Church.
Much tree damage was also evident in the vicinity of the polo field entrance,
and one had to drive carefully. 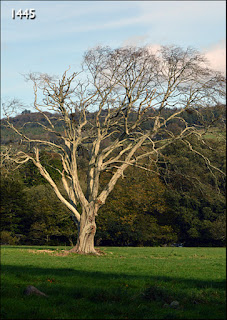 Fortunately the above tree, a very short distance from the previous one,
was undamaged and so survived.
Regrettably, however, this photogenic specimen appears to be dying for some reason.

Only when I saw the 5.30pm news on TV3 this evening
was I made aware of serious damage to approximately six roofs
in Brown Street.
Hopefully all have been repaired by now, and that no one injured.

Other parts of the country were not so lucky.
Thanks to the excellent radio and tv coverage,
we were able to see or hear what was happening nationwide throughout the day and evening.
At 10pm yesterday, the storm had passed away to the N.W. and N.
and there was hardly a 'puff' of wind!
Today, Tuesday, was a brilliant sunny day, and most things were back to normal.
Posted by Seán at 12:01 PM