On the lookout for new photographic subjects and re-visiting old ones in recent days in the Blackwater Valley area, I came across the sign underneath at a lay-by beside the stream known as - ‘Abha na Séad’ (River of the Jewels). 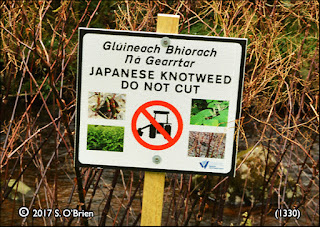 About ten other people were there, including some children, enjoying this little-known beauty spot, where two streams meet. One lady was overheard saying – “They must be rare plants with a conservation order on them. They’d probably look lovely in my garden, but I’d better abide with the wording on the notice”. I was not surprised at her attitude, the signs being so poorly worded. However, I explained the dangers of uprooting or cutting such plants, possibly the most invasive non-native plants in the country.
On the riverbank, no less than two such signs were in situ, where there are only two small colonies of the plants, as opposed to the Coolroe area of Portlaw, where they grow in profusion by the roadside in two areas with no warning signs.  Now coming into leaf, apart from the environmental damage that will happen, they will soon become a serious traffic hazard at a dangerous bend (where the Solar Panel s Farm notice is currently displayed).


The Coolroe problem has previously been well explained on this site (October 29th 2016). Three emails to the Council Environment Dept. didn’t even bring an acknowledgement of receipt. Are any of our many councillors out there looking in???  Over to you!
Posted by Seán at 8:54 PM