Once more, I've relied on my friend, Ann Walsh, to supply me with some pictures from the official unveiling, on Easter Saturday, of the 1916 centenary memorial, located in a small landscaped area adjacent to the roundabout at Malcomson Square. The memorial consists of a simple reproduction of the 1916 Proclamation of the Irish Republic on black marble. A flagpole, for the national flag, has been erected beside the memorial. Obviously, the site will be used on the occasion of important national events, and will, hopefully, be treated with the respect it deserves. Congratulations to the organisers, Portlaw Tidy Towns Group, and all others concerned. 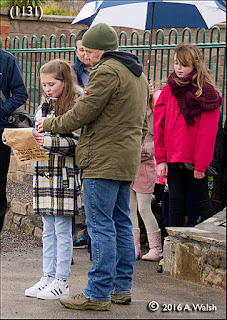 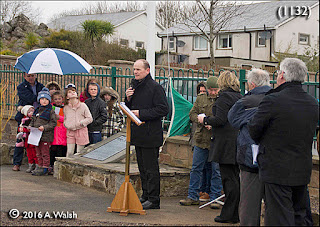 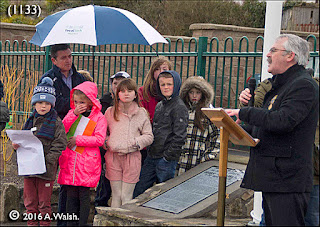 Another speaker was Mr. Ger Crotty, chairman of the Portlaw Heritage Group. 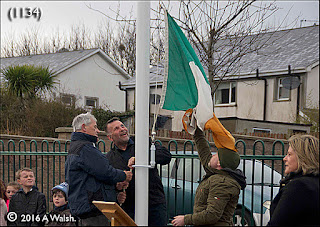 Mr. Johnny Crotty of the local Tidy Towns Group, raising the tricolour, with asistance from others.
On the extreme right can be seen Mrs. Mary Butler, Portlaw's newly elected T.D.,
main speaker on the occasion.

On the following day, Easter Sunday,
Portlaw's annual Republican Easter Parade was held, which I was unable to attend.
Hereunder see one of the many flags flown on the occasion. 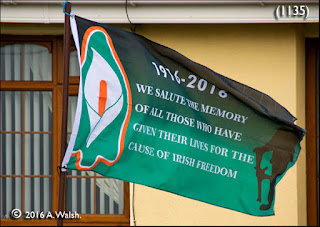 A youthful onlooker, who may well witness the bi-centenary of the Rebellion in 2116! 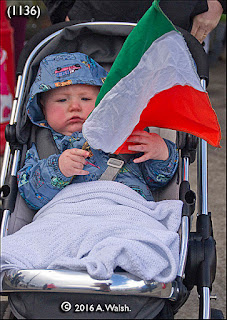 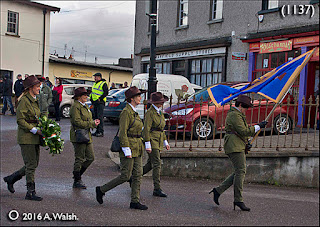 A section of the Easter Parade, commemorating the part played by Cumann na mBan
in the Rebellion.
I was pleasantly surprised in recent days to see that Waterford's outer ring road
has now been officially named after this important women's organisation. 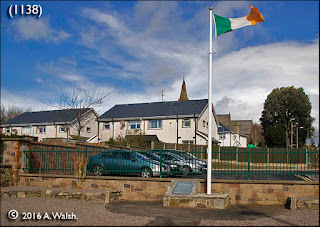 The tricolour flying beside the newly erected memorial,
with the spire of Holy Trinity Church in the background.
That same evening (Easter Saturday), a special 1916 Centenary memorial service was held
at St. Paul's Church, Piltown, a Fiddown Union of Churches (Church of Ireland) event.

A close-up shot of the memorial will be published here, when such becomes available.
Thanks, once again, to Ann Walsh for coming to the rescue with these images!
A single left click on any image will reveal an enlarged version.

. . . and a picture of our local pipe band at the event,
donated by a photographer who wishes to remain anonymous: 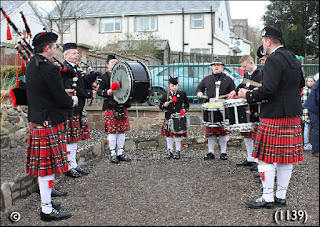