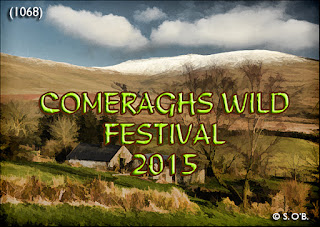 This festival, involving Walks & Talks, Storytelling, Traditional Music & Song, Poetry & Film, Nature & Adventure, Stair agus Oidhreacht, was surely one of the most successful of the many new festivals that have been springing up in recent years.
The Official Opening, including Tionól na nDéise, was held at the Cotton Mill, Portlaw on the Thursday evening where a lengthy tribute, in Irish with simultaneous translation to English, was paid to Portlaw native, An tAthair Risteáird de hIndeberg – ‘Ceóltóir, Gaeilgeóir, agus Déiseach’, by Chris MacAuliffe and an Doctúir Séamus Ó Diollúin, WIT.  The venue was packed to capacity.
Events thereafter included: The Tallest and Smallest Circus at both Portlaw and Ballymacarbry national schools (Friday afternoon), ‘A Ball of Light in One Hand’ (Dungarvan – Friday), Amhráin agus Ceol – Eochar na Staire’ (Coolnasméar Friday), Edith Collier Exhibition (Bunmahon all weekend), Harvest Walk and Play – (Comeragh Mountains - Friday).
On Saturday afternoon there was a family walk in Crough Woods (Kilrossanty), a walk in the footsteps of Edith Collier (Bunmahon), Canoeing with Ardmore Adventures and storytelling by Niall de Búrca; both of the latter at Mahon Falls.
On Saturday afternoon to evening, the highlight was an open-air concert by Mary Black in the courtyard at Curraghmore House. Mary was supported by Kíla and Rue de la Coup. Same evening Ballymacarbry hosted a show – ‘As the Story Goes’ plus poet, Tom McCarthy. The Art Hand, on the Copper Coast hosted ‘Words Gone Wild’ same evening.
Sunday morning to afternoon saw a variety of still more interactive events; Muddy Boots Walk (Comeraghs), Treasure Hunt (Stradbally); Circle Dance Workshop at Kilossanty, Eco Fairy Tales at Kilmacthomas, also Flora of the Comeraghs at Rathgormack.

Maybe the best wine was kept until the last, when Comhaltas Craobh na gComarach from Cúl na Sméar and Cór Fear na nDéise from An Rinn and An tSean Phobail presented a concert of traditional music, song and sean-nós dancing at The Copper Coast Geopark Centre. to close the festival.  I was one of the first to arrive, thus ensuring a good seat from where I could photograph the participants. As anticipated, a ‘full house’ turned up, many people having to stand.

A young harpist (and violinist) with strong Portlaw connections!

Micheál Marrinan of Cúl na Sméar, Fear an Tí for the evening,
with xxxxx xxxxx, chairperson of the organising committee,
speaking at the conclusion of the concert.

Some info on the Edith Collier exhibition to follow.