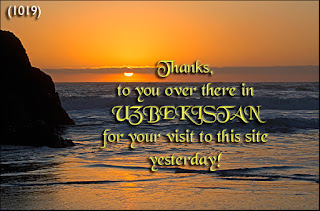 UZBEKISTAN, now a democratic republic, located east of the Caspian Sea in Central Asia, was formerly part of the Union of Soviet Socialist Republics. The country, famous for it's mosques, linked to the 6,000 km long, great Silk Road, which once stretched from China to the Mediterranean Sea. The capital city, Tashkent, has a population of nearly 2,500,000. Total population for the entire country is over 30,000,000.