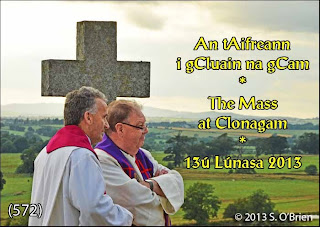 On August 13th, Mass was celebrated at Clonagam cemetery for the repose of the souls of the dead from both Catholic and Church of Ireland backgrounds; this event being the second of it's kind  in three years. The original suggestion for the celebration came from Ms. Agnes O'Shea, a native of Piltown, whose ancestors are buried in the cemetery.

Celebrant on the occasion was Rev. Fr. Ned Hassett, C.C., Portlaw, assisted by Rev. Fr. Pat Geer of Ballyneale Parish, who acted as concelebrant.  Playing a prominent part also was Very Revd. Canon George Cliffe of the Fiddown Union of Parishes (Portlaw, Piltown, Fiddown and Kilmeadan), who read the Gospel. The first reading was by Lord Waterford, who lives close-by in Curraghmore. A truly historic and ecumenical occasion, which was well supported by local people, and some who had travelled a distance. The weather was perfect! 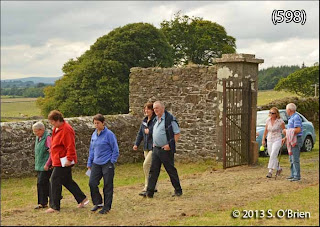 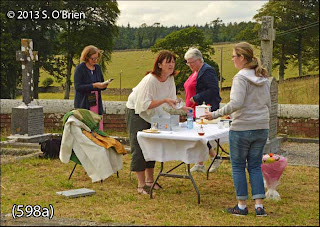 Preparations had to be made. 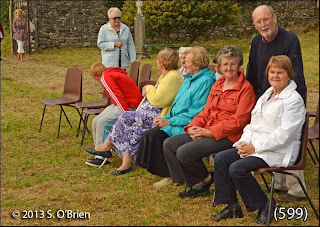 Seating was scarce, so the early birds got the best! 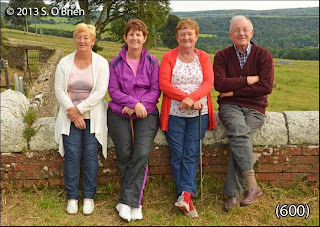 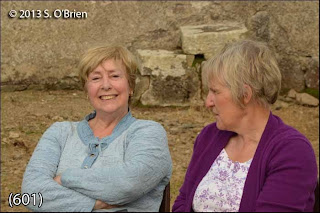 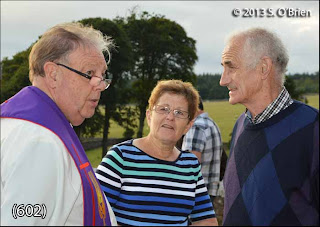 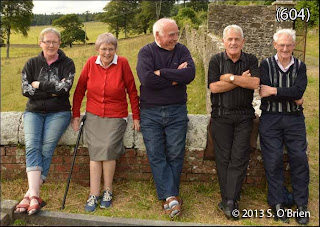 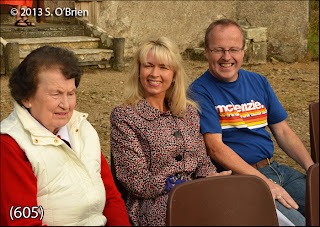 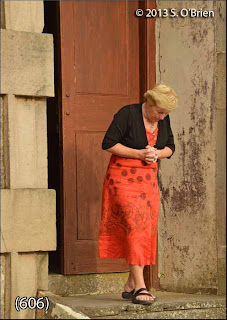 Many availed of the opportunity of seeing the interior of this unique building
with it's magnificent memorials to the dead. 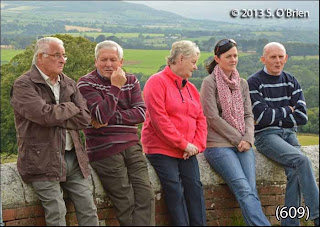 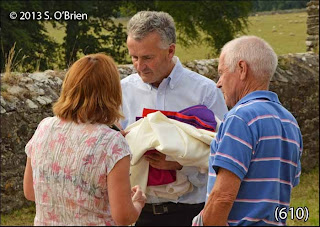 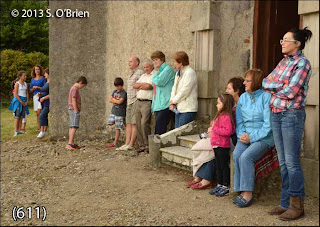 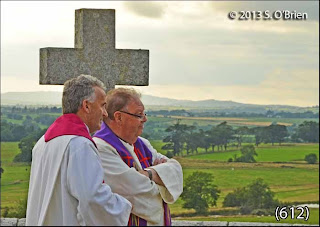 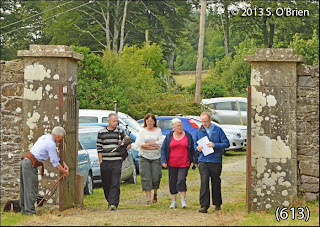 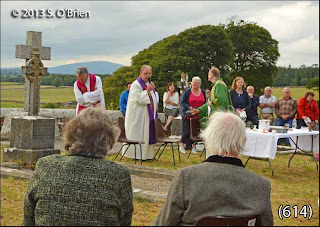 Canon Cliffe starts the proceedings with a short address.
In the foreground - Lord and Lady Waterford. 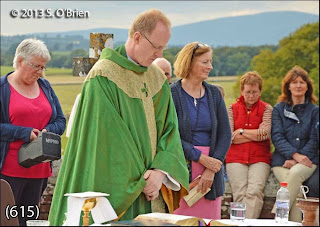 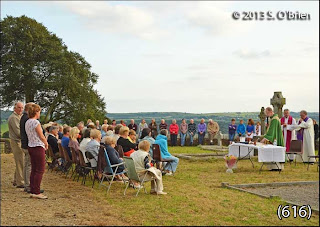 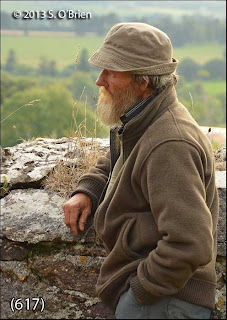 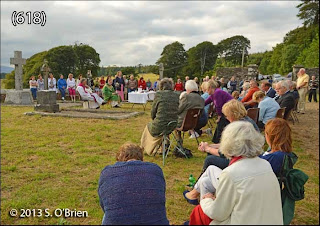 In the centre here (approx.) can be seen Lord Waterford as he delivers the first reading. 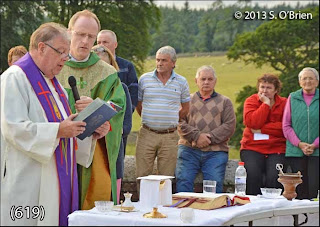 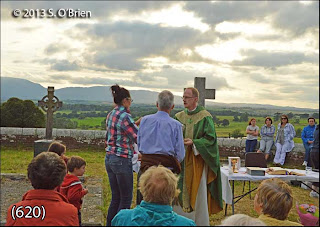 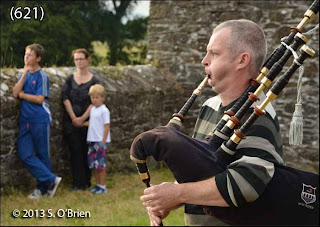 Appropriate music for the occasion was provided by Paul Power of the Portlaw Pipe Band. 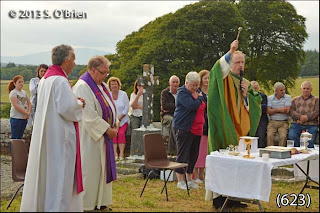 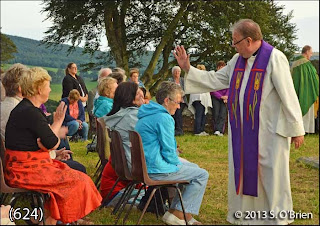 Canon Cliffe at the 'Peace be with you' moment.

The rousing music of the pipes welcomed the community of Port Lách into the graveyard of Cluain na gCam to attend mass, on Tuesday the 13th of August. Father Ned  as curate was chief celebrant and preached. Canon George Cliffe, as rector, welcomed everyone, and read the gospel.Fr Pat Gear concelebrated. The churchyard had already been made ready for the celebration by the local people who transported chairs, altar, vestments and everything necessary for the celebration of Eucharist. The workers from Currach Mór cleared the pathway outside the gate, cut the grass and supervised the sheep as they put the finishing touches to the grasscutting!  The evening was really lovely and people sat on chairs and on stone walls while some people stood around in small groups.  One visualized our forebears who gathered in just such quiet groups to attend mass in the woods or on hillsides like the Tower Hill during the dark days of the Penal Laws.  How happy they would be to now hear the two traditions join together to worship God.  Given that a Catholic church stood here before the Protestant church was built on the same site in 1741, and that people of both faiths are buried here in the graveyard, what more suitable location could there be for this celebration! The Church itself was opened in honour of the occasion so people could go in and admire the wonderful memorials, the tasteful stained glass windows and the lovely tiled floor. People gravitated towards the memorial to the wife of the fifth Marquis of Waterford, Florence Grosvenor Rowley and her newborn baby, both of whom, sadly, died during the birth.
Verses pertaining to children were read from the Gospel of Saint Matthew, Chapter 18.  “Amen I say to you, unless you turn and become like little children, you shall not enter the kingdom of the heavens.”  Father Ned referred to those lines as he talked about a very pleasant few hours he had spent minding and playing with his nieces and nephews, who were totally engrossed in the enjoyment of the moment.  He imagined that if children were here in the graveyard, they would “roll in the grass, and walk on the graves, and sit on the kerbs or flat headstones.”  They would not distinguish between rank or class, race or religion, human or animal, but would instead find everything fascinating. Would that we could retain some of the acceptance, innocence and sense of wonder of the young - as today’s gospel invites us to do.
Referring to the meteoric shower of the previous night, Father Ned said that the world and all of us were conceived in a “flaring forth of love and life and light and energy.”  To quote William Blake:“The angel that presided o’re our birth said:
‘Little creatures, formed of joy and mirth,
Go love without the help of anything on earth.’”
We were reminded of the people who inhabited and worked on this hill before us – the Gatherer Hunters, the Celts who worshipped the human head, an example of which still exists today in the form of ‘Mother Brown.’ The remains of Christian liosanna are still visible here. We who now live here remember them all as we gaze at the same beautiful landscape which they enjoyed – Cnoc an Aifrinn, Na Cumaraigh, the woods, the glens, and the farms now being lit by the bright, piercing rays of the evening sun.
The service draws to a close and all we hear now is murmured conversation and the singing of the birds as we file out the gate. “We think of sheep and shepherd, lost and found, greatest and least. God save all here. Amen.” 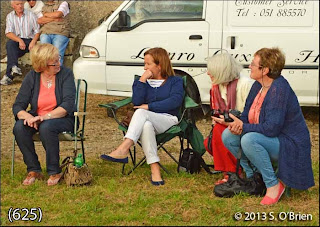 When Mass had ended, there was plenty of time for conversing with other participants. 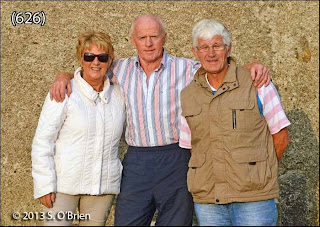 "Surely, you're not forgetting our photo", said Ann Laffan! 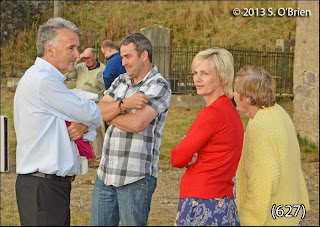 After a few final  farewells, it was over until another year.

(This concludes this sequence of pictures)

The names of all present not being known, some photos had to be left without captions.