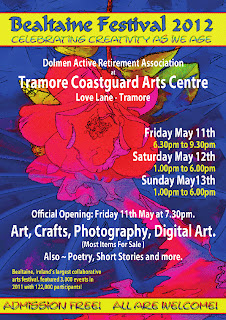 The annual Bealtaine Festival, running for many years, celebrates creativity in older age and is organised by Age & Opportunity/ Older & Bolder. Active Retirement Ireland, with over 23,000 members in over 500 ARAs (Active Retirement Associations) throughout the countrty, plays a major role in the event.
Dolmen ARA, catering for actively retired people (over 55 years of age)  in East Waterford, somewhat pre-occupied with other events last year (2011), is now back in full swing for 2012, and presenting their 'wares' at the Tramore Coastguard Station Arts Centre on the dates mentioned above. The Centre is located at Love Lane, Tramore, but is also accessible for pedestrians from the Doneraile Walk.
Looking forward to seeing you there! The Centre has a newly-opened Coffee Dock . . . rapidly becoming the 'in place' to meet, have a look at the current exhibitions and a chat over a 'cuppa'.

Dolmen ARA, ten years of age this year (with a big celebration to come in June), has had a 'full house' for the past number of years and was unable to admit new members, resulting in a waiting list. However, in recent weeks, some new applicants from the Portlaw area have been admitted and made most welcome.  Portlaw is more-or-less in the centre of the catchment area, which stretches from the city outskirts to Kilmacthomas and Fews, and from Clonea-Power toward Fennor, There is a number of other branches in the county and about five in the city area. Some of the other branches have waiting lists also.

A double left-click on the image will show an enlarged version, making it more legible!
Posted by Seán at 3:40 PM