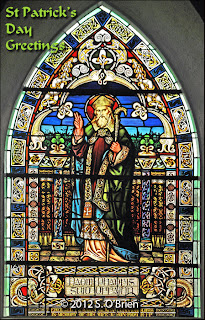 St Patrick's Day Greetings to all you visitors to this site.  Tomorrow, 17th March 2012, is the feast-day of Ireland's patron saint. and is a national holiday. This day is celebrated around the world by the Irish disapora, and is as much about culture nowadays as it is about religion.
This fine window at Lorrha church (R.C.), north Tipperary, which has an equally fine window depicting St, Ruadhán, a local saint, has no maker's name thereon, but was obviously designed and manufactured by Watsons of Youghal, whose work I am familiar with, and which is always profusely illustrated with Celtic motifs. There are many great examples of Watson craftsmanship in the Waterford area and further afield.
Well worth looking out for by Celtic art practitioners! 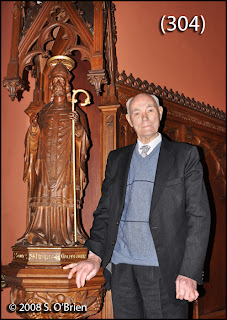 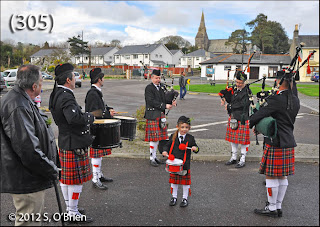 Portlaw Pipe Band, having played outside St. Patrick's Church, before and after Mass,  then travelled down to Malcomson Square, and played a great selection of airs there 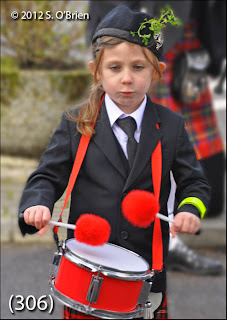 Captivating, youthful Shauna Maher put on a great performance again this year to the delight of onlookers! 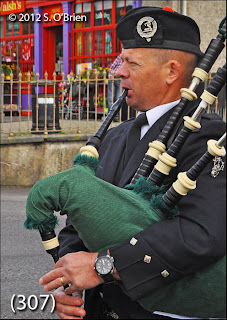 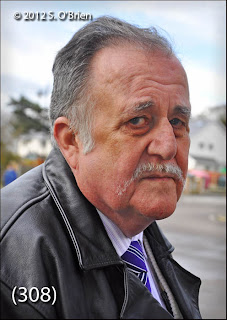 Keeping a critical eye on happenings, as usual, was Willie Maher. 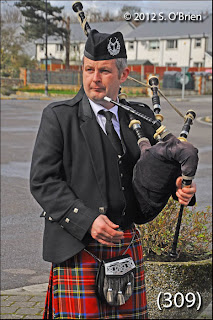 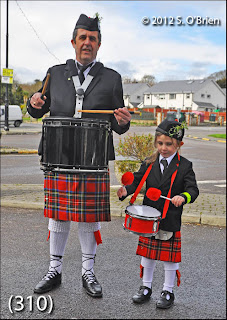 Shauna Maher, once more, with her father, John, a drummer also. 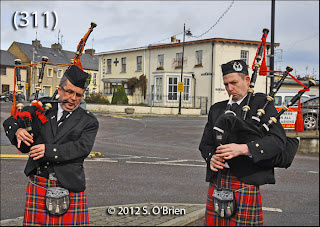 Mothers' Day came immediately after St. Patrick's Day, so the majority of shops (70% approx. nationwide) stayed open to, hopefully, increase sales during these recessionary times.
Bláthanna (meaning Flowers), Portlaw, done likewise and was actually getting orders from some distant lands, in addition to local custom, thanks to publicity in FaceBook! 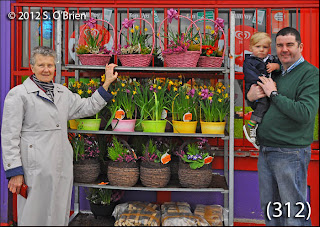 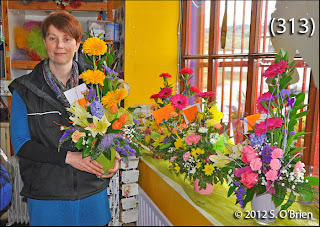 Colette Walsh, the 'driving force' behind Bláthanna, on her busiest day of the year!
Check out Bláthanna on Facebook at:
www.facebook.com/pages/Bláthanna-Florist/120156144729854?sk

A double left-click should enlarge the images, but the top image is somewhat erratic in it's behaviour!


As the Stained Glass window seems to have a permanent enlargement problem,  you can view it by clicking on link hereunder instead.