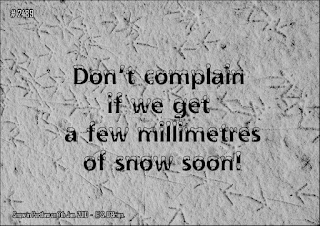 From the diary of the Rector’s daughter – Dorothea Herbert,  in Carrick-on-Suir.   A 1783 entry, by Seán O’Brien , Portlaw:

Whilst Dorothea’s handwriting was quite beautiful, her knowledge of punctuation, capitalization of words, spelling, etc., was extremely poor. Thus, the part-contents of her diary reproduced here are as she wrote them.

My Brothers Now came home for the Christmas Holidays and on Christmas Day commenced a Most terrible frost and Snow  which lasted to the 21st of February – Some Old People said it was bad as the Hard Frost in the Year 39 – At its commencement we were in constant Alarm about the Boys who hunted over the Snow fearless of Danger and the dreadful Event at Curraghmore (the accidental death of Lord Waterford’s son in 1778) often occurd to our frightened Immaginations-but the Snow soon became Mountainous high with consequent Inundations that soon prevented Man or Beast from stirring-Many Cottages were totally buried in the Snow or demolished by floods-All our people were continually employ’d in keeping our Mansion habitable-sometimes we were driven from the lower Regions by the Water pouring in to every Room in deep lakes-The Trees were one Sheet of christialized Snow in which we lost all the Bays and evergreens that abounded in Our Gardens -The Number of Lives lost and the Damage done all over Europe could Not be Calculated-Every Newspaper brought the most dismal Accounts foreign and domestic-And all Nature lay in Mourning.

The Snow however afforded great Sport to the two Boys and almost made up for their loss of hunting-We sat the whole time wrapt up in Great Coats over the fire not dabbling at the snow piled windows-We had Mrs. O’Hara a Music Mistress in the House-but to play or do any kind of Work was impossible. And we spent the whole 47 Days while the cold lasted playing Cards and roasting Sprats in both parlours for we were forced to divide and have two fires-The Sprats were driven in such plenty that heaps were thrown out everywhere-It is astonishing we did not die of Dysenteries for from Breakfast till Bedtime we had plates upon plates of them-Mrs. O Hara and we played Cards for them.