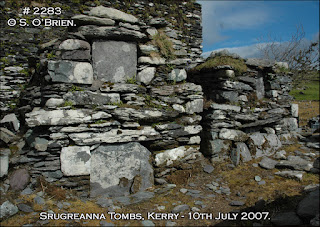 Two-storey tombs in this cemetery near Cahirciveen, as not enough soil to bury the people. Some of their remains still quite visible inside those where the entrance stone is down. Similar situations can be seen in other Kerry and Clare cemeteries.
This cemetery is located a short distance from the Cahirciveen Workhouse, where scores of people died during the Great Famine.
Ludlow, a Cromwellian General, second in command of the English Parliamentary forces in Ireland, said in 1651, when in the Burren, Co. Clare -

"of this barony it is said that it is a country where there is not water enough to drown a man, wood enough to hang one, nor earth enough to bury them."