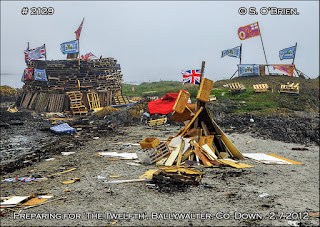 Preparations for 'The Twelfth' commence well before the date itself in many areas of Northern Ireland.  Above scene photographed by the coast, in the village of Ballywalter on July 2nd 2012.  For some, it's the ideal opportunity to get rid of old mattresses, prams, blankets, furniture, etc! 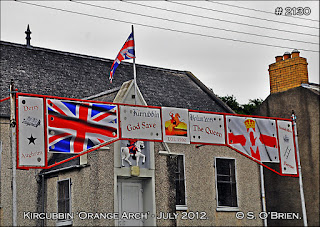 'Orange Arches', under which the parades pass, can be seen in many towns and villages at this time. 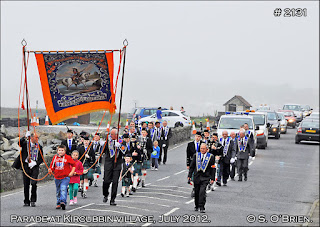 A very small parade here at fog-bound Kircubbin village some days before the nearby bigger parades. Kircubbin is on the shores of Strangford Lough, Co. Down.
The village was originally called Kilcubin, after St. Gobán, later evolving to Kirkubbin, and finally Kircubbin.
Posted by Seán at 10:45 AM