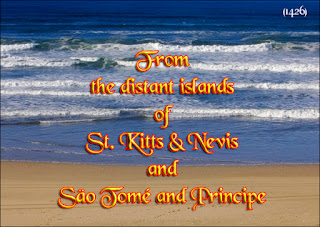 What a surprise to note we had visitors to this site during the past two weeks
from places seldom heard of.
However I can remember well having some items from those places in my  philatelic collection very many years ago!

São Tomé and Príncipe, officially the Democratic Republic of São Tomé and Príncipe, is a Portuguese-speaking island nation in the Gulf of Guinea, off the western equatorial coast of Central Africa. It consists of two archipelagos around the two main islands: São Tomé and Príncipe, located about 140 kilometres (87 miles) apart and about 250 and 225 kilometres (155 and 140 miles), respectively, off the northwestern coast of Gabon.
With a population of 192,993 (2013 Census), São Tomé and Príncipe is the second-smallest African country after Seychelles, as well as the smallest Portuguese-speaking country. Its people are predominantly of African and mestiço descent, with most practising Roman Catholicism. The legacy of Portuguese rule is also visible in the country's culture, customs, and music, which fuse European and African influences.
The Federation of Saint Kitts and Nevis, also known as the Federation of Saint Christopher and Nevis,  is a two-island country in the West Indies. Located in the Leeward Islands chain of the Lesser Antilles, it is the smallest sovereign state in the Western Hemisphere, in both area and population. The country is a Commonwealth realm, with the British monarch, who is currently Queen Elizabeth II, as head of state.
Saint Kitts and Nevis were among the first islands in the Caribbean to be settled by Europeans.
(Above info from WIKIPEDIA)

Will have to re-type it when I get the chance!).