The Scarlet Pimpernel is back!!!

Keeping an eye on a single Scarlet Pimpernel plant in the Tower Hill area for a number of years, It disappeared completely last year and did not appear either this year. Then, yesterday, on viewing an area about fifteen metres from the same location, lo and behold, there was a number of clumps of this tiny but beautiful wildflower. They had appeared where two years ago approx. some people from Coillte had bulldozed an area where lots of rubbish was dumped inside the wall going N.W along the road from Clonagam church.  Obviously they had sprang up from seeds which lay dormant for very many years. 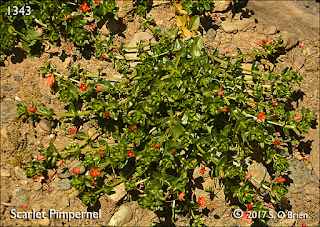 Dumping in this area has now reached epidemic proportions. Within the last week, a trailer-load of household rubbish was dumped over the wall here, and yesterday within an hour of travelling up the Clonagam road and back, a sackfull of bottles etc. was dumped ON THE ROADSIDE at one of the entrances to the forestry area. Do these people not know that there is a bottle bank much nearer, at the GAA field. Where are the new surveillance cameras we were told of during the past year???

Within hours of posting the above item yesterday, I was once more walking in the Clonagam area, when what did I see but another trailer-load of rubbish, just 3 or 4 metres from the above Scarlet Pimpernel plant. This time the rubbish consisted of what almost certainly looked like the crap from a dogs run ( large plastic container full of it),some corrugated galvanised and perspex roof panels and some chipboard . . . obviously the contents of a dog's kennel.  Presumably the poor dog had died in appalling conditions!

If you are aware of who done this, or any other dumping, why not contact the City & County Council?

Within four days of posting the previous addendum (May 16th), lo and behold what was dumped at the same location but a toilet bowl and handbasin plus matching support pillar. Oddly enough, the items seemed to be in perfect condition, and could have easily been sold on the Internet, fetching a substantial amount. A blue bag nearby contained broken tiles.  Obviously the 'dumper' now is showing off his new bathroom suite with matching  tiled surround. 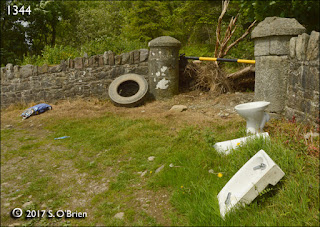 Yesterday, May 31st, I was back at the scene nd now a large tyre was dumped  there. 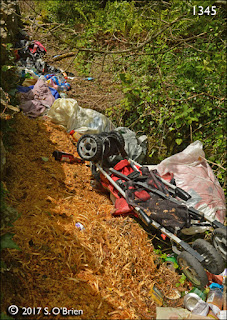 Further down the road, inside the same wall,  was dumped what was obviously a trailer-load of assorted household rubbish, as can be seen above, which shows a red 'buggy' in the foreground and a large quantity of wood shavings on the left side. 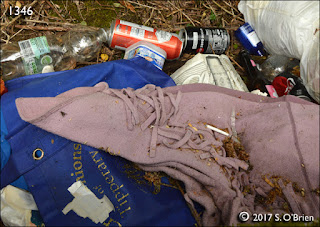 Included amongst this huge array of items was the above distinctive piece of clothing, or whatever. You may recognise it as having belonged to your neighbour? Then there's that Tipperary blue bag. 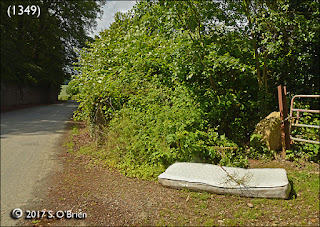 Today. just a few days later,
a newly-dumped mattress beside the road to Curraghmore estate and beyond,
and a huge area of Japanese Knotweed immediately behind it!
The problem further up the road has now become a serious traffic hazard,
as the rapidly spreading plant has now reduced the carriageway
to the width of one vehicle, especially by a very sharp bend.

A report to Councillor Dunphy of Kilkenny Council
re a large area of the same invasive non-native species
on bank of Suir at the Fiddown amenity area,
brought two immediate responses,
saying he would immediately contact his county's environment department.
Much appreciated.

A reported sighting, a few weeks ago,  of a large area of the same species,
in the grounds of a public building in Dublin,
again brought a fast response,
saying 'No problem, we'll come tomorrow and cut it all down'
which was done!!!
No further comment on that 'estate manager' !!!