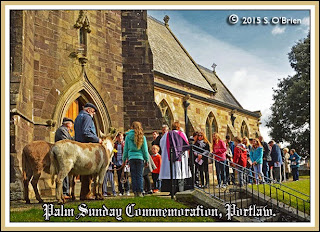 I’m pleased to announce that the above image of mine, already on this site with explanatory notes, was runner-up in a recent All-Ireland competition, organised by the Church of Ireland Press Office, Belfast.

The overall winner, Lilian Webb, has been a close friend from, and since the early days of audio-visual competitions organised by the Irish Photographic Federation. Lilian is a member of the Celbridge Camera Club, County Kildare. Neither of us knew the other was competing, so it was quite a surprise seeing one another at the Synod, in the midst of hundreds of delegates from all around the country! 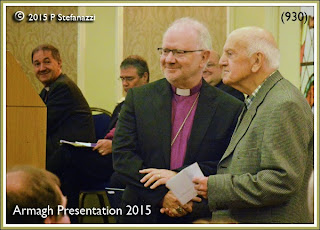 Presentation of award by the Church of Ireland Primate, Most Revd. Richard Clarke at the 2015 General Synod, Armagh.

On the extreme left can be seen the Rt. Revd. Michael Andrew James Burrows, Bishop of Cashel, Waterford, Lismore, Ferns, Ossory and Leighlin, who was obviously pleased to know that the picture represented parish life in his diocese.

Thanks to my partner, Phyllis, author of the above picture,  but whose flash failed to fire when needed. Nevertheless, with difficulty, the image was salvaged, despite considerable noise or grain.
Posted by Seán at 3:19 PM