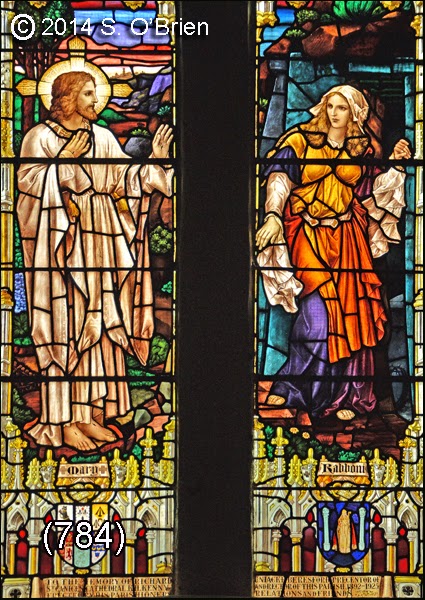 The fine window above, plus enlarged bottom panels hereunder, were photographed at St. Mary's Church (Church of Ireland/Anglican), Inistioge, on a recent outing. Thanks to the lady who gave us permission to enter the church and do so, and filled us in on some history relating to the building and it's contents.

The church lies on the site of an Augustinian Priory, founded in the early 1200s by the Anglo-Norman lord, Thomas FitzAnthony.  King Henry VIII had the Priory suppressed in 1539 during the 'Dissolution'.

You may ask - 'Why this image on a Portlaw website?"   The answer can be found in the dedication on the bottom panels, which are shown underneath:

"To the Memory of Richard Uniacke Beresford, Precentor of St. Canice's Cathedral, Kilkenny, and Rector of this Parish, 1892 - 1925. Erected by his Parishioners, Relatives and Friends."

It so happens that the Rev. Uniacke Beresford (1858-1925) had strong Portlaw and Stradbally connections. The Uniackes were associated with the Youghal area from the 1500s, and the Stradbally area from the late 1700s, while the Beresfords arrived in Portlaw in 1717, marrying into the de la Poer family of Curraghmore.

The window depicts Jesus Christ having arisen from the dead  on the left light(opening),
On the right light is depicted Mary Magdalene,
the first person to see Christ after his Resurrection, when he said to her: "Mary!".
She turned and said to him - "Rabboni!" - which means, 'Master' or 'Teacher'.
This incident is told in all four Gospel narratives.
(See: King James Bible - John chapter 20, verse 16).