Young Portlaw Lady Gets Buckingham Palace Invitation!
Tara Smith, nee Kelly, daughter of Jack and Bridget Kelly of Coolfin, Portlaw, has been invited to attend The Queen’s Garden Party at Buckingham Palace on June 3rd next.
Tara was educated at the Convent of Mercy, Portlaw, and Greenhill Secondary School, Carrick-on-Suir, following which Coopers & Lybrand sponsored her for studies in Accountancy. Four years later, Tara qualified as a Chartered Accountant from the Regional College, Waterford. Having worked in Ireland for a few years, she then emigrated to Toronto, Canada to work for PricewaterhouseCoopers.
Having met her future husband, Dan Smith, while they were attending a friend’s wedding, Tara later decided to move to Leeds, U.K., to live.
Tara presently holds a senior position as Head of Financial Control & Policy, Dept for Work & Pensions in the U.K., based mostly in Leeds.  For her ‘sterling contribution’ in this field, came the invitation from Buckingham Palace.
This will be a great day out for Tara and Dan, who eagerly look forward to the occasion.
Congratulations, Tara, from all your friends in Portlaw, and to everyone who helped you achieve this great honour!
Tara, however, is not the only person with a Coolfin connection to attend a royal garden party. A few months ago, Emma Verling trod the same path. The connection with Portlaw was that in the 1950s Emma’s family lived at Tom Hickey’s house, Coolfin, at the bottom of Chapel Hill. This house is now the residence of Buddy and Anne Nolan. Emma’s father, Martin, went to school in Portlaw for some time.
Emma, a scientific conservation advisor, was selected to represent her employers and the Irish community in the U.K at the party.  Presumably she had a wonderful time, and now two young Portlaw ladies have put Coolfin back on the map, as history tells us that Coolfin was the location of old Portlaw before the town developed on the other side of the Clódagh River during the cotton-mill era. It is a miracle of chance that two people with a similar connection should be chosen to attend such important functions. A little bit of history has been made in our time! 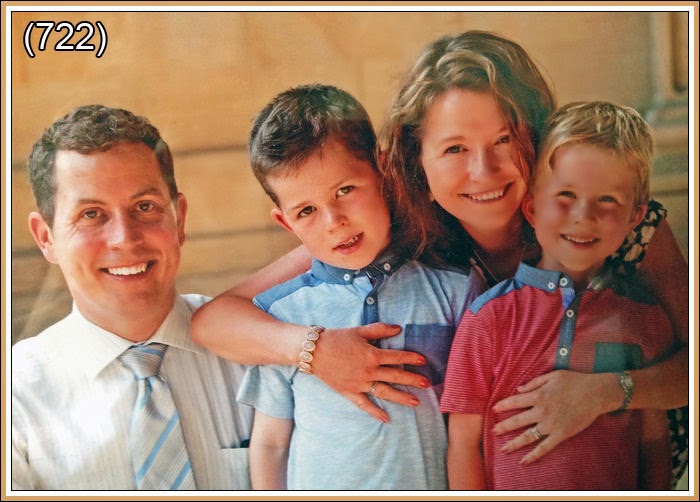 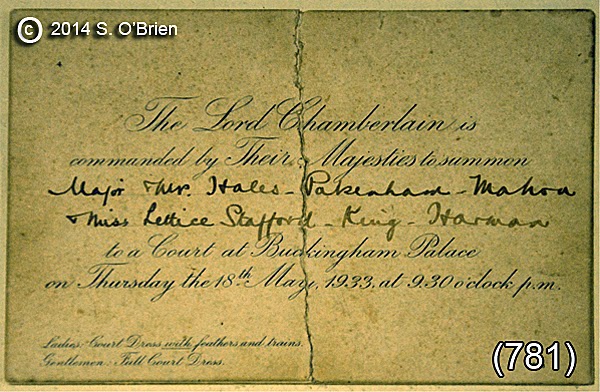 Another Palace Invitation!
This time from 1933 to the Mahon family of Strokestown House, County Roscommon,
which I visited on Sunday last, June 8th (2014).
The hour-long guided tour of the house yielded the great history of the house and surrounding area,
thanks to the expert guide - Emma.
Photography (without flash only) was allowed,
so I was using widest aperture, a VR lens and highest ISO settings for most pictures, as most rooms were dark.
This invitation was framed and behind glass.
The history of the house and the many people who lived there is quite lengthy and intricate,
so I will not go into that.
It was interesting, however, to note that two members of that family
married ladies with the surname Kelly!!!
I DO have the lengthy family tree. Maybe there are Portlaw connections!!!
The bottom two lines, which may be difficult to read at this size, state:

Note that the word 'with' was underlined for emphasis.

Further pictures of Strokestown House, Garden and National Famine Museum
will be published on my Flickr site sometime in the future.
There's a link on this site.


(One left click on the images will show an enlarged version)