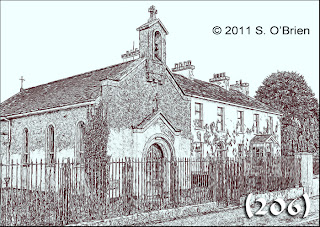 The former Mercy Convent, Portlaw, vacated by the Sisters of Mercy a short few years ago, and now rapidly deteriorating and being vandalised. Is this to become another complete wreck, like the former Malcomson mansion - Mayfield House?


It was hoped by the Malcomson family, owners of Portlaw’s Cotton-Mill, that the (later to be a Convent) building, from circa 1840, would serve as the local station house for the proposed new Waterford and Limerick Railway line. This rail link would be invaluable to them for their thriving cotton industry.  Building commenced on this new line at Limerick in sometime after 1848, and the entire line to Waterford was completed in 1854. The idea for a Portlaw station never materialised, as Fiddown was chosen instead for the purpose, the railway line having been built on the far (east) side of river instead . . . a decision which the Malcomsons appealed, but failed.   The building, however, remained in Malcomson ownership until 1883.
A former Portlaw Parish Priest, Rev. John McGrath, who died in 1882, left his entire assets to charity, which included the setting up of a convent in the town.  Time was not lost in acquiring the Malcomson  building, and five sisters from the Mercy Convent in Cahir arrived there in June 1883, including Mother M.Bernard Vaughan, who was Mother Superior at that time.  These committed and enthusiastic ladies immediately commenced teaching in the local girls school and provided evening classes for those young females who daily worked long hours at the Mayfield Spinning Company factory (the Cotton-Mill). The nuns also spent time looking after the poor and sick in the area.  A chapel was added to the building in 1934, thanks to the generosity of the people of Portlaw.
First Superior of the convent was Mother M. Peter Clare McCarthy in 1885, who was followed in 1891 by Mother M. McCormack, and many others thereafter until 1999 when the sisters vacated the convent in 1999. One sister, a native of county Tipperary, Sr. Columba – now known as Sr. Margaret – decided to stay on in Portlaw, where she is still a prominent and active member of the local community.
The convent and grounds were sold in 2000, for development as a residential area. Quite a number of houses were built on the grounds and are now lived in, but the future of the main convent building and chapel is uncertain 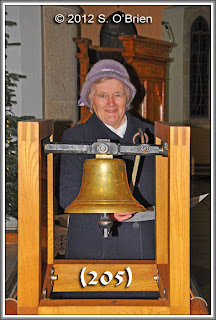 Sr. Margaret, mentioned in the text above, ringing the Eucharistic Congress Bell at St. Patrick's Church, Portlaw, during yesterday's (6th Jan. 2012) Bell ceremonies.
(see  soon-to-appear adjacent photographs and text re the Bell's visit to Portlaw).
Posted by Seán at 4:39 PM