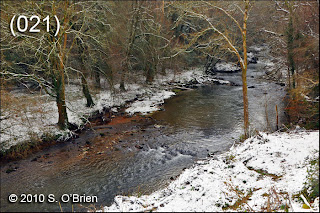 With little rain for some weeks, followed by a number of light snowfalls, the Clódagh river was at it's lowest for ages. (Clódagh - from the Gaelic - Clóideach - 'mountain torrent', which it sometimes is!).  Today, Dec. 27th, it was announced that the local water supply would be cut off for 12 hours per night.  A similar situation has been developing countrywide.
Posted by Seán at 7:36 PM